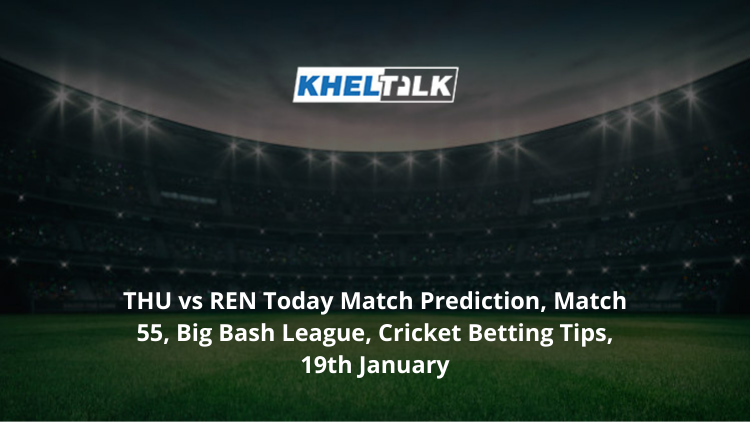 KhelTalk is the only destination that brings you the finest prediction for today’s match that you can trust. We are here for THU vs REN, Today Match Prediction, Big Bash League 2021-22, Online Cricket Betting Tips, which will provide every user with a clear picture of which team and in what aspect they can place their bets.

Thunders are currently placed in the 3rd spot on the points table with 31 points. They are getting their form back at the right moment in the tournament as we witnessed some consecutive wins from their end. Thunders have a star-studded batting line-up in the presence of Alex Hales, Chris Green, Jason Sangha who have found some consistency with their batting lately in the tournament.

They faced Sixers in their last game where after being asked to bat first Sixers posted a target of 195 runs. The Thunder bowlers failed to provide breakthroughs at regular intervals as Josh Philippe and Daniel Hughes both went on to score their half-centuries. In return, Chris Green remained the highest contributor scoring a half-century while the who team was knocked over at 137 Runs, losing the match by 60 Runs.

They look in excellent form at the moment with both their departments performing well while they still have a chance to rise to the top of the points table as they have a healthy run rate of +0.779. They still need a bit of tweaking on the bowling side in order to restrict the other side for lower totals.

Renegades have had a disappointing run in this edition of BBL as they are currently placed at the bottom of the points table with 15 points. They managed to secure three wins in the 12 games they have played so far while one match had no result.

They consecutively lost their last three matches in the tournament while their recent loss came against Melbourne Stars by six wickets. After electing to bat first, the Renegades posted a target of 122 Runs by the end of 20 overs as the Stars bowlers completely overpowered them. In return, Glenn Maxwell’s 68* off 45 laid down the platform for the Stars to chase the given target in just 14.3 overs.

Renegades are struggling with their batting department while the bowlers are leaking way too many runs. They boast a strong bowling attack with the likes of Kane Richardson and Zahir Khan but their inconsistency is proving to be the turning point in the game for them.

MCG is a neutral surface with equal assistance for both batters and bowlers. The batters need to choose their shots wisely at first and can play freely once they are set. The average first innings score on this wicket is 158. Winning the toss and bowling first will be a good option for the skippers.

THU vs REN, Who will win the match, Today Match Prediction

Sydney Thunder is expected to win this match against Melbourne Renegades.

After a shaky shart Thunders have found their form at the right moment in the tournament. They have a deep-seated batting line-up with the likes of Alex Hales and Jason Sangha who have found their form and will pose a threat to Renegades bowlers. On the other hand, the Renegades are struggling with their bowling department as they are leaking way too many runs.

The Renegades boast a strong bowling attack with the likes of Kane Richardson and Reece Topley but the other bowlers are yet to show some consistent performances. They have potential batters with the likes of Aaron Finch and Mackenzie Harvey but the collective effort while putting runs on board seems to be missing which is proving to be a turning point for them.

Hales has played a few match-winning knocks in this edition for the former BBL winners. So far he has amassed 330 runs in just 11 games. Looking forward to his run with the willow, Hales scored 23 off 18 in his last game against the Sydney Sixers. The betting players should go for a safe pick in this category and pick the top in-form batsman of Thunders, who has the highest probability to go for a demolishing knock against the bowling line-up of Melbourne Renegades.

After his return to the Renegades, Finch has been a key contributor in many matches for his team. While playing just 9 games so far he has amassed 229 Runs with a strike rate close to 127. He is in influential form with the bat and scored a 45 off 44 to back his side in his last game against Melbourne Stars. He is a safe pick here for the betting players given the unexpected form the other Renegade batters are in.

Sandhu displayed impressive bowling to take out the Hurricane’s top order in a previous fixture. While he proved to be quite expensive in the last game against the Sixers, Sandhu bagged one major scalp in his four overs. He has been rising up ranks for the Thunders and has bagged 13 wickets in 9 games so far. He will be a bowler to look out for in this fixture.

Richardson is a must-pick for the Renegades as a bowler as he is currently leading the bowling attack for them. He is a skillful fast bowler who can get the ball to move around and has bagged 19 wickets in 11 matches. Richardson is also a handy lower-order batsman and can save some boundaries as well with his athleticism. He has a wide range of deliveries in his arsenal which could trouble the Thunder batters.