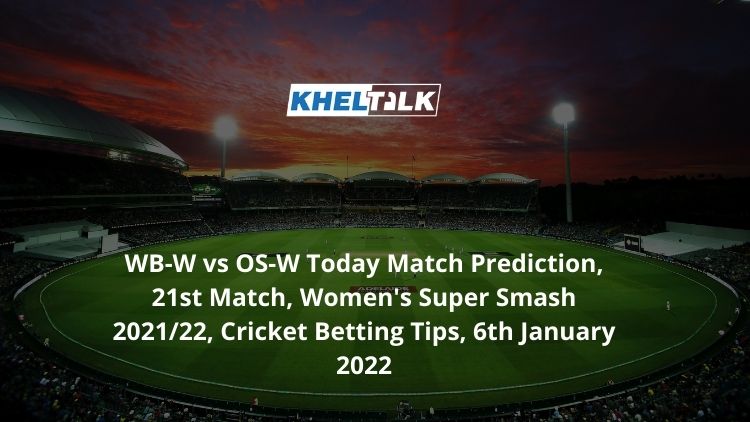 KhelTalk match prediction is the only destination that brings you the finest today match prediction that you can trust. We are here for WB-W vs CM-W, Today Match Prediction, 12th Match, Online Cricket Betting Tips, which will provide every user with a clear picture of which team and in what aspect they can place their bets.

Wellington Blaze is currently placed in the 2nd spot on the points table with 20 points. They have won 5 out of 5 games they have played so far and are just beneath Otago with a healthy 2.600 Net Run rate. Blaze is currently in a good zone in this tournament, as they too haven’t lost a single game so far in this tournament. They batted first in all the matches and restricted the opposition by large margins.

They have already faced Otago Sparks in their last match where after winning the toss they elected to bat first and posted a target of 157 Runs by the end of 20 overs. Amelia Kerr scored a stunning half-century while Leigh Kasperek contributed 24 Runs.

In return, the Wellington bowlers put up a great show of their abilities as they didn’t let any Otago batters form a partnership. The bowlers picked wickets at regular intervals and restricted Otago to a mere total of 91 Runs. All the five bowlers performed exceptionally well and picked two scalps each. They will certainly be looking to repeat the same performance against Otago in this fixture as well.

Otago Sparks Women is currently leading the table with 6 wins, one loss, and one no result to their name with 24 points. They also have a healthy net run rate of 0.786. They had a good run last season as well as they finished second in the points table losing the pre-final to Auckland failing to make it into the finals. This year they will try to rectify the mistakes of the past and have already started their campaign on a good note.

They faced Auckland in their last fixture where after electing to bat first they posted a target of 153 runs. Their skipper, Suzie Bates played a splendid knock of 89 Runs in 61 balls including 10 fours while Katey Martin amassed 40 runs.

In return, Auckland couldn’t resist the lethal bowling attack of Otago’s leading bowler EJ Carson as she picked four scalps while conceding 12 runs in four overs. ME Loe and Emma Black also accounted for two scalps each. Currently, both the departments of Otago are in-form and performing consistently in the tournament. They will certainly be looking to rectify the mistakes of the past against Wellington and emerge on top of the latter.

The weather is expected to be cloudy in Wellington as we can expect some showers starting early in the morning. However, rain There is a high chance for rain to play spoilsport. The temperature will hover around 16-18 °C.

The pitch at the Basin Reserve in Wellington is likely to be a good one to bat on. With the ball expected to come onto the bat nicely, the batters can play shots on the top. The pacers might find some movement with the ball in the second half. As numbers suggest batting first would be a good option for skippers winning the toss.

WB-W vs OS-W, 11th Match, Who will win the match, Today Match Prediction

Wellington already has the winning momentum to their side and will be looking forward to carrying on the same in this game as well. On the other hand, Otago Sparks has many key players like Katey Martin and their skipper, Suzie Bates which they would be relying on to win this match. But they really need to be on their toes to defeat the Wellington side on their home ground.

Kerr is a must-pick for her all-around abilities as a player. She is currently the second-highest run-scorer in the tournament with 281 Runs in 5 matches with a 118.06 Strike Rate. In the first match against Canterbury, she scored 71 runs off 55 balls and took four scalps in the same. She will prove to be a vital player as she hammered 56 runs in the last match against Otago and picked two scalps as well.

Suzie Bates has always been the star performer for the Otago and the most experienced as a skipper. She has always contributed whenever the team needs to be backed. She is currently the leading scorer in the tournament. In 7 games she has smashed 330 runs with an impressive average of 66.00. In the last encounter against Auckland, she played a captain’s knock while scoring 89 runs in 61 balls and is expected to continue to domination in Wellington as well.

The 29-year old off-break bowler from Otago has proved to be vital for Wellington on many occasions. She took two scalps while conceding just 16 runs in the last match against Otago and will be looking to repeat the same performance in this fixture as well. Kasperek is currently the leading wicket getter for Wellington with 10 wickets in 5 games.

With 11 wickets in 7 games, Carson is leading the tally for most wickets in the tournament. We witnessed a stunning spell from her in the last game against Auckland where she picked four scalps to restrict Auckland batters to a score of 108 Runs in the second innings. She proved to be a game-changer in that fixture while sealing the win for her side.