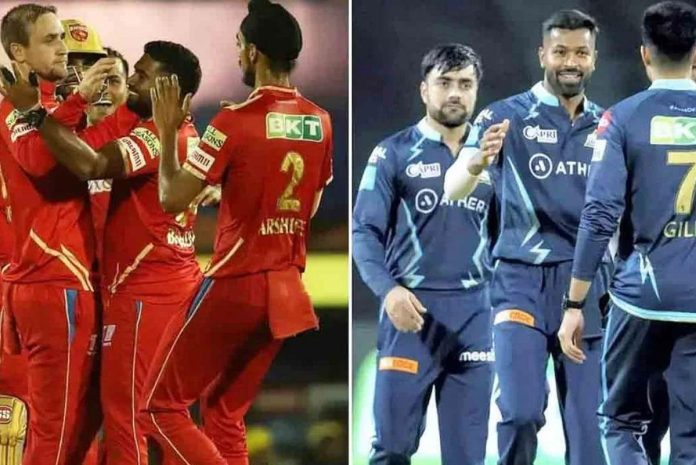 Two young cricketers from the Indian team are all set to guide their respective sides in the 16th match of the TATA IPL 2022 where Punjab Kings and Gujarat Titans will face each other. The two sides have had a decent run in the tournament so far and will be looking to continue the same. The match will take place at Brabourne Stadium in Mumbai.

The Mayank Agarwal-led side has won 2 out of 3 matches and is placed at the 4th position in the points table. They lost against Kolkata Knight Riders but went on to defeat defending champions Chennai Super Kings in their recent match by 54 runs.

As far as Gujarat Titans are concerned, under the leadership of Hardik Pandya, they have emerged as the only team to not lose a game yet. They started their campaign by defeating other debutants Lucknow Super Giants by 5 wickets and followed it with a win over Delhi Capitals by 14 runs.

Ahead of this contest, let’s have a look at the Top 5 Players that might prove to be the game-changers.

Mayank Agarwal is expected to come good against the potent Gujarat Titans bowling attack. Despite playing a handy knock against the Royal Challengers Bangalore in their opening game, Agarwal has since been dismissed by the swinging ball twice. In three games he has contributed 37 Runs and got out single digits in the last two matches. However, he has already played alongside Mohammed Shami in the past and could deal reasonably well with the speedster. Now that a captain’s knock is much awaited from him. It is expected to come out in this contest.

Punjab Kings has three out of the four highest powerPlay scores so far, and the Sri Lankan left-hander, Rajapaksa has directly contributed to that with scores of 43, 31, and 9. His performance has been impactful for the side and that leaves the Punjab management in a dilemma of adjusting the position of Jonny Bairstow in the playing 11. Rajapaksa is an attacking left-handed batsman that can play both spin and pace well. Strengthening the middle order he will definitely pose a threat to the Titans bowlers if he retains his position in the team.

No one could forget the heroics of Matthew Wade in the T20 World Cup semifinals and his abilities in the shorter format of the game. After a handy knock of 30 runs in the opening match against Super Giants he couldn’t contribute much in the last outing against Delhi Capitals. The wicketkeeper opener thrives against fast bowlers and is expected to make a comeback in this contest with the willow.

Mohammed Shami will look to unleash his thunderbolts on Liam Livingstone, who had single-handedly demolished the CSK attack in the previous game. Shami alongside Lockie Ferguson makes for one of the most potent new-ball pairs in this edition of IPL. As the Titans are mostly dependent upon their opening bowling depth, Mohammed Shami will play a key role as a bowler if Punjab Kings bat first. In just two games, Shami has picked up five wickets with an impressive economy rate of just 6.88. He was almost unplayable with the new ball against the Lucknow Super Giants and also ended up winning the Man of the Match award.

Rahul Chahar is the leading wicket-taker for Punjab Kings with six wickets in three games at an economy of 5. He starred with the bat too in the last game for Kings, scoring 12 off 8 against Chennai Super Kings. With 49 Wickets under his belt in IPL, the leg spinner can surely trouble the Gujarat batters.