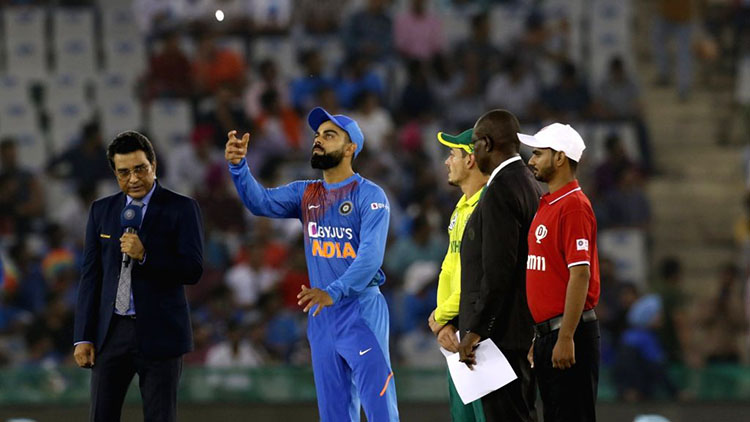 India have started their home season by defeating South Africa by 7 wickets in the 2nd india vs south Africa T20I at Mohali. With this 1-0 lead, they have ensured they can’t lose the series after the first T20I was washed out without a ball being bowled.

Opting to bowl first, India did well to restrict South Africa to 149-5 in 20 overs on a batting friendly wicket, and the target was chased down with an over to spare. While India were clinical in their performance, South Africa failed to maintain their intensity throughout the contest to truly test the hosts in the 2nd india vs south africa t20 match.

Here are the 3 reasons why India were able to outplay South Africa in this match:

1. Indian bowlers contained the Proteas’ batters well towards the end of theindia vs south africa innings

South Africa started their batting steadily and were 78-1 in 10 overs, courtesy the partnership of Quinton de Kock (52 runs off 37 balls) and Temba Bavuma (49 runs off 43 balls). But a stunning catch by Virat Kohli off Navdeep Saini (1/34) in the 12th over ended the South African skipper’s sojourn.

Ravindra Jadeja (1/31) then sent back Rassie van der Dussen (1 run off 2 balls) in the very next over and pushed South Africa on to the backfoot. The wicket of Bavuma in the 18th over by Deepak Chahar (2/22) and of David Miller (18 runs off 15 balls) in the 19th over by Hardik Pandya (1/31) further decelerated the South African innings at the death.

The visitors couldn’t dispatch the bowlers well enough at the end and finished with 149-5 in 20 overs, which was well short of the average score at Mohali.

Chasing 150 runs in 20 overs, Rohit Sharma (12 runs off 12 balls) and Shikhar Dhawan (40 runs off 31 balls) gave India a flying start in the india vs south Africa 2nd innings . After the departure of Rohit, skipper Virat Kohli (72 not out off 52 balls) joined Dhawan in the middle to take forward the chase.

The duo took on the South African bowling attack and added 61 runs in 47 balls to put India in the driver’s seat. Both the batsmen looked comfortable at the crease and ensured that India kept pace with the required run rate.

Even though Dhawan fell to an outstanding catch by David Miller, Kohli stayed unbeaten till the end to take India over the finish line without any hiccups.

After finishing with a below-par total, the South African bowling needed to step up and produce some outstanding spells to defend it. But the bowlers could not find a way to put a check on India’s chase.

They could have bounced back after the departure of Rohit by restricting the scoring rate and picking another wicket or two, but they looked toothless and failed to make any impact. Apart from Andile Phehlukwayo (1/20) and Tabraiz Shamsi (1/19), all the other bowlers were expensive and allowed India to score freely.

Overall the batsmen scored too many singles and doubles, along with boundaries at regular intervals, for the bowlers to retain any hope of making the chase close.