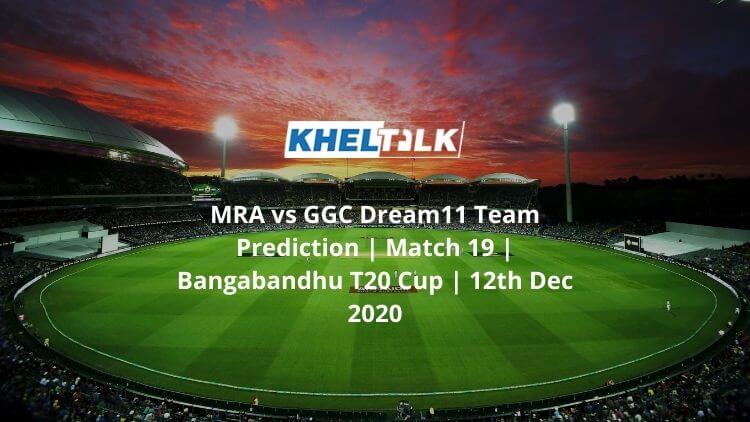 Minister Group Rajshahi and Gazi Group Chattogram will come head to head against each other in the 19th fixture of the Bangabandhu T20 2020. The match is scheduled to be played at Sher-e-Bangla National Stadium in Mirpur, Dhaka. Rajshahi will not be fighting to fix their place in the playoffs as they have just four points to their name and have lost five consecutive games. On the other hand, Gazi Group has already entered the Playoffs door and will be checking their bench strength.  Let’s go through our Dream11 Team Prediction for the upcoming game of the Bangabandhu T20 Cup.

Now with time, the surface has turned slow and will favor the bowlers. Batsmen must take time to read the ball properly or be ready to go back to the pavilion soon.

M Hossain Shanto has scored maximum runs for Minister Rajshahi. In just 7 innings, he has managed to smash 290 runs at an average of 41.42 with a strike rate of 159.34.

Mukidul Islam has bagged maximum wickets for Minister Rajshahi. In just seven games, he has managed to chip 11 wickets. Don’t miss him out.

M Hossain has been consistent with both bat as well as with the ball. Scoring 107 runs in just 5 innings along with 7 wickets in seven games. He has mentioned himself in the MVP list.

MRA vs GGC Dream11 Prediction: Who will win the match

Gazi Group might bench some important players and this might come as an advantage to Minister Rajshahi. Both the teams have talented players, but Minister Group is likely to win this game to make themselves fix in the playoffs. our Dream11 Team Prediction experts have predicted that MRA will notch a victory here.