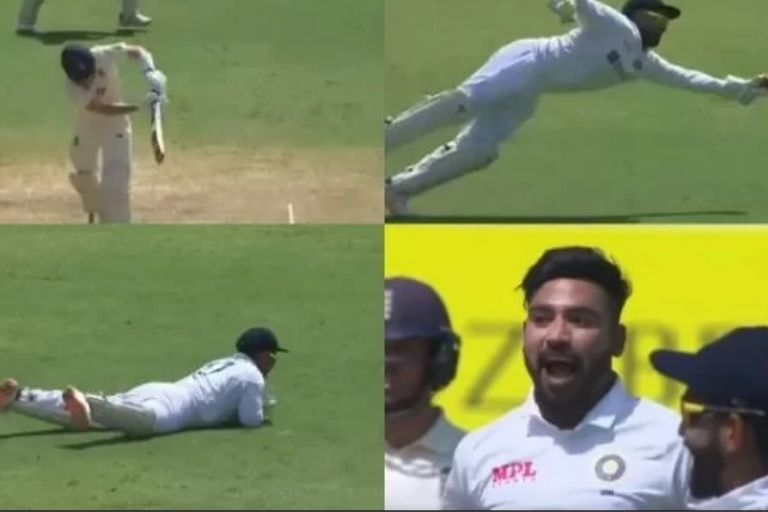 India has taken a strong lead over England in the 2nd Test in Chennai. They have castled visitors’ side in the first innings at a score of 134 runs. But, one thing that hogged the spotlight on the previous day was the brilliant wicketkeeping of Rishabh Pant. The youngster pouched a brilliant catch that left everyone on the field dumbstruck.

India has marked a strong comeback in the Test series. They lost the previous game by a big margin. But, now, they are back in the grooves and are in prime position to win the game. The track in Chennai has played in its traditional way. On one side spinners are having fun while bowling. Meanwhile, the fast-bowlers also had some good moments on the field. Ravi Ashwin again managed to take a five-wicket haul to his name. His brilliant skills made it possible for the hosts in dismissing the visitors at a lowly score.

However, the moment that hogged the spotlight of the day was Rishabh Pant’s brilliant catch off Mohammed Siraj. The latter had to wait for 38 overs before he got the ball to bowl in the game. But, he soon got his first wicket of the game.

The moment he was introduced in the game, Ollie Pope and Ben Foakes had stitched a decent stand of 35 runs. However, they couldn’t add to that tally and Siraj dismissed Pope and credits should be given to athletic Pant.

Indian pacer bowled a short delivery towards the leg-side. And, Pope saw an opportunity to score runs and tried to play it with soft hands towards third men. But, the batsman ended up kicking the ball. Meanwhile, the wicketkeeper Rishabh Pant went for a full stretched dive towards his left and pouched an exceptional catch.

The ball popped out of the gloves but Pant made sure that the ball should not fall on the ground. Coming onto the match, England was castled at a score of 134 runs. And, India was playing at a score of 54 runs for a loss of one wicket. Shubhman Gill became the last wicket of the day to fall.