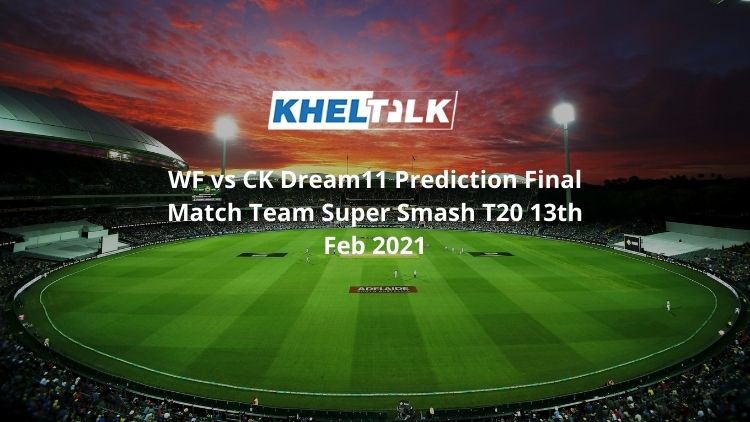 Here are the stats for the teams WF vs CK :

The surface at Basin Reserve is expected to behave neutrally. The average batting score at this venue in Super Smash this season is 163 runs.

There will be clouds for sure but no interruption from the rain will be seen.

Pick up more batsmen at this venue as they will help you earn more points.

Wellington has been the most consistent team in this tournament. Having 9 wins from 10 games, Wellington made it certain that they will play the finals.

Defending champions will give in their 200% to lift the title once again. No changes are expected.

The team will prefer the same line-up which is currently going well here.

Leaving behind Central Districts, Canterbury has entered in the finals for the tournament. They have six wins from 10 games.

No changes are expected to happen for this game.

It’s do or die situation for both the teams, let’s see who comes out with smiling faces.

Here are a few predictions for the captain pick for the WF vs CK clash.

D Mitchell has been outstanding with that bat as well as with the ball. In 9 innings, he has slammed 339 runs and has chipped 10 wickets side by side.

F Allen took the standards to next level as he smashed 496 runs in 100 innings for Wellington and also bagged 8 wickets for his side.

H Bannett has been economical with the ball and has maximum wickets to his name i.e 13 at an economy of 7.46

He kept scoring runs from the other side and didn’t let the momentum fall.

J Neesham is performing well with the ball and will surely make an impact in the game.

T Astle has got wickets in recent games and is liekly to pick some again.

McConchie will surely get you points from both the end.

Here is the Dream 11 Team prediction for Wf vs CK. We are going with players who are currently in good form and can win the match with ease.

Head To Head Team For Wellington Firebirds vs Canterbury Kings

Who Will Win Today Between WF vs CK Dream11 Prediction, Final match?

According to Kheltalk’s astrology WF vs CK Dream11 match Prediction, WF will win the match.

According to Kheltalk’s WF vs CK Dream11 toss prediction, WF will win the toss and ask NK to bowl first.