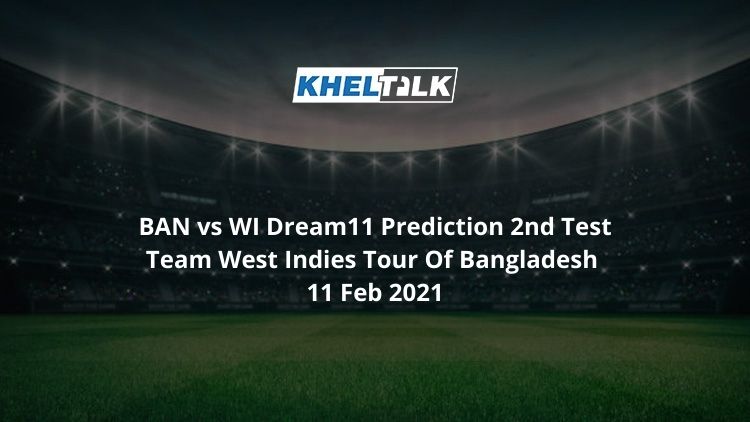 Here Are The Details For The Match BAN vs WI, Dream 11 Match prediction

Here are the stats for the team’s BAN vs WI:-

The pitch of the Sher-e-Bangla National Stadium, Dhaka is a good surface to bat and the teams usually prefer to bat first here. We did see a decent score in the ODIs here. We can expect something around 380 in the first innings.

We will enjoy a bright sunny day. Undoubtedly, good weather to win the toss and bat. There is no rain forecast for this Test, thus, another entertaining contest awaits us here.

The toss will play a crucial role in this match and it is good to go with more batsmen if Bangladesh is batting first and more bowlers from the same team if they are bowling first. Neither teams will fancy a forth-innings chase and there will be ample support for the spinners.

An inexperienced side but is full of talent. West Indies will be looking to their good form after taking down the hosts in the first Test.

West Indies will be hopeful that their senior players Jermaine Blackwood, Kemar Roach, Kyle Mayers do well in this contest and of course, they will be backing their youngsters who looked good in the second contest here.

The team has everything to defeat Bangladesh once again to prove that the first win isn’t any fluke. They are likely to go in with the same playing XI.

Bangladesh will be affected by the injury of Shakib Al Hasan. However, the team has enough talent to bounce back.

Bangladesh will begin this match as the underdog for the first time in the series. They do have a lot of worries when it comes to the form of their best players.

Since this is a fight between two well-known sides, we could easily predict the players who can be the captain of the Dream 11 fantasy team.

Here are a few predictions for the captain pick for the BAN vs WI clash.

Kyle Mayers-  He was the star player in the first match where he went on to score a doubleton.

Mushfiqur Rahim- He is the best player in the longer format of the game for his country and will be eager to get runs on board here.

Mehidy Hasan Miraz-  He can be backed because of his all-around ability. He had a ton and also went on to pick eight wickets.

Tamim Iqbal- The opener will be keen to continue his good form here, he, however, missed out in the first match and will look to bounce back.

Das had a good outing in the first match and will be the key player in this contest. We can expect a ton from him here.

He bowled well in the first match and was able to pick up four wickets. He will be keen to do well here for sure.

He will be looking to lead the team from the front in this contest. It will be interesting to see how he goes here after losing the first match.

In the absence of major players like Holder, Brathwaite holds the key in the batting order as well as in the field.

He is coming into this game after a good performance in the practice match and will be the key bowler for the team here and can swing his bat for a few quick runs too.

Here is the Dream 11 Team prediction for BAN vs WI. Since Bangladesh are a better team, we are going with more number of players from their team.

Head To Head Teams For Bangladesh vs West Indies

Who Will Win Today Between BAN vs WI Dream11 Prediction, 2nd Test Match?

According to Kheltalk’s astrology BAN vs WI Dream11 match Prediction, BAN will win the match.

According to Kheltalk’s BAN vs WI Dream11 toss prediction, WI will win the toss and ask BAN to bat first.