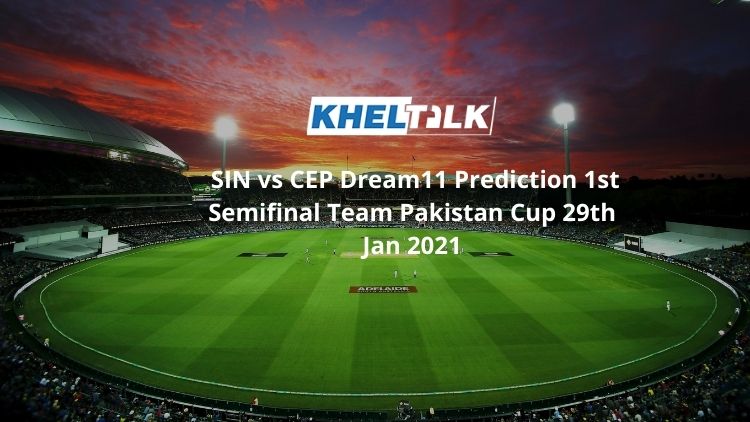 Here are the stats for the teams SIN vs CEP:

The pitch will assist the bowlers more and the early swing for the pacers will determine the result of the match.

It will be a sunny day in Karachi on Friday. The humidity will be around 34% and the temperature nearly 26 degrees Celsius. No chance of rain during the match.

It is safer to go with the experienced batsmen and the bowlers who are in good form currently. One might find it difficult to bat first here and thus the toss will play the major role here.

Sindh ended the league stage well on top with seven wins to their name and are the best team in the contest.

With no doubts, the team is in excellent form but in their fixture against the same team, Sindh went down. They will be looking to bounce back here and it will be interesting to see how they do it.

Meanwhile, Central Punjab isn’t the best team here but they do have a good squad and we can expect them to do well for sure.

Central Punjab will come into this contest after a good run in the final contest of the tournament where they had managed to take down the same opponent.

Khurram Manzoor- He holds the key in the batting order here. He will be opening the innings for his team which is an added advantage here.

Tayyab Tahir- He averages more than 65 here and will be the top pick for the captain because of his consistency.

Hassan Khan- His all-round ability will come in handy in this contest. He is the best all-rounder available here, this could be his day.

Asad Shafiq- He will be leading the team from the front here. He scored a brilliant half-century in the last match as well.

He is in good touch and was one of the star performers in the last match too.

He will be playing the finishing role for the team and is in good form currently. We can expect him to do well here.

Nasim holds the key in the middle-order for the team. He is likely to do well here for sure.

His all-round ability makes him a must-have pick here and he will be playing a key role here for sure.

Asghar will be looking to produce early breakthroughs here. In the last match, he ended up picking two wickets for the team.

Here is the Dream 11 Team prediction for SIN vs CEP. We are going with players who are currently in good form and can win the match with ease.

Head To Head Team For Sindh vs Central Punjab

Who Will Win Today Between SIN vs CEP Dream11 Prediction?

According to Kheltalk’s astrology SIN vs CEP Dream11 match Prediction, CEP will win the match.

According to Kheltalk’s SIN vs CEP Dream11 toss prediction, CEP will win the toss and will opt to bat first.