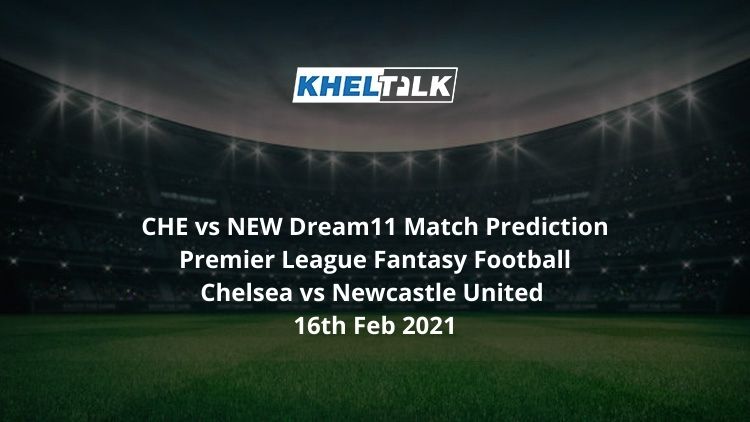 Chelsea is all set to welcome Newcastle United to Stamford Bridge for their next fixture in the Premier League on Monday night. The Blues would be eyeing the 4th win in a row in the competition as well. Chelsea has been impressive since the new boss Thomas Tuchel as the side has reached the 5th position in the points table with 10 points in the last 4 matches.

On the other hand, Newcastle United hasn’t had the best of the run in the tournament so far. They sit just one position above the relegation zone 8 points clear off Fulham at the 18th position. The visitors have managed 2 wins in their last 5 matches, and they would be happy if they could get any point out of this match. Let’s take a look at CHE vs NEW Dream11 Football Prediction for this English Premier League fixture.

Injured: Thiago Silva and Kai Havertz are out with respective injuries.

Suspended: Jeff Hendrick is out after earning a red card in the last fixture against Southampton.

Mason Mount has been in fine form for the Blues so far this season. The youngster has been directly involved in 6 goals in 20 appearances this season. He has scored 3 goals and assisted 3 further to underline his importance in the attack. He is going to be a vital pick for CHE vs NEW Dream11 Team Prediction.

Ben Chilwell has emerged as one of the leaders of the pack for Chelsea this season. The defender hasn’t been solid on the defensive front, but he also has contributed to the attack. The left-back has scored 2 goals and also registered 4 assists against his name. He is a must-pick in CHE vs NEW Dream11 Team Prediction.

Timo Werner hasn’t been his best in Chelsea’s blue jersey so far this season. However, he still is a crucial player for Thomas Tuchel, and he has been involved in 9 goals directly this season. The striker has scored 4 goals and assisted 5 goals further, and he would be eager to find some form tonight.

Allan-Saint Maximin has been involved in 4 goals directly for Newcastle United in 9 starts this season. He would have an added responsibility tonight in Callum Ferguson’s absence, and he can be a shrewd pick for CHE vs NEW Dream11 Fantasy team.