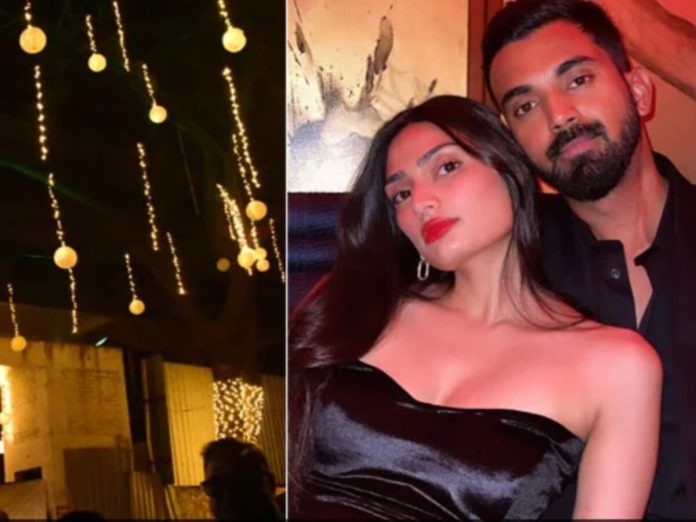 Athiya Shetty, daughter of Suniel Shetty, is all set to tie the knot soon to Indian cricketer KL Rahul, and it appears that wedding stuff is well underway! There are now only a few days until the wedding, and photos of KL Rahul’s Mumbai home being beautifully lit up are going viral on social media.

According to reports, KL Rahul and Athiya Shetty’s wedding ceremonies will take place between January 21 and 23. at Suniel Shetty’s residence Jahaan in Khandala. The Internet has been humming with rumours regarding the guest list and other specifics as the wedding day approaches. Now that images and videos of the cricketer’s lit-up Mumbai home have surfaced, fans can’t keep their excitement!

Later this month, Athiya Shetty and KL Rahul wish to get married. The wedding ceremonies will take place between January 21 and 23, as was originally planned. On January 23, the pair is most likely to say their vows.

The two families are already making preparations in a video posted by the pap account, which shows KL Rahul’s home in Pali Hill, Bandra, being decorated with hanging lights. with only a few days until the memorable occasion. In one of the paparazzi videos, the residence of the Cricketer is decorated with white hanging lights, and a few staff members can be seen keeping an eye on the setup. Fans on social media are now obsessing over the video.

KL Rahul and Athiya Shetty are due to be wed and based on the wedding preparations at the Indian cricketer’s Mumbai home, one can expect a lavish celebration. Athiya and KL Rahul were recently spotted together at the Mumbai airport on their way back from Dubai, where they spent New Year’s Eve together.

The wedding of Athiya and KL Rahul will take place at Athiya’s father, actor Suniel Shettyfarmhouse, in Khandala over the course of three days. On January 21, a ladies’ night has been planned to begin things off. Numerous guests will attend the sangeet ceremony the next day. The sangeet of Athiya is likely to feature performances by her friends, brother, actor Ahan Shetty, and parents Suniel and Maya Shetty.

“It is an extremely close-knit family affair. Only friends and family members will be a part of the wedding. It’s most likely that you may not see many industry peeps,” a source told HT.

They never publicly discussed each other, but in 2021, when the cricketer attended the screening of Athiya’s brother Ahan’s debut film Tadap, they made their relationship official. At the celebration, the pair posed with Athiya’s family. Suniel is close friends with KL Rahul and has been seen at some of his cricket games. He has frequently shown his admiration for the cricketer.

In the 2015 romantic action movie Hero, Athiya made her acting debut. She has only appeared in two movies since then: Mubarakan (2017) and Motichoor Chaknachoor (2019).