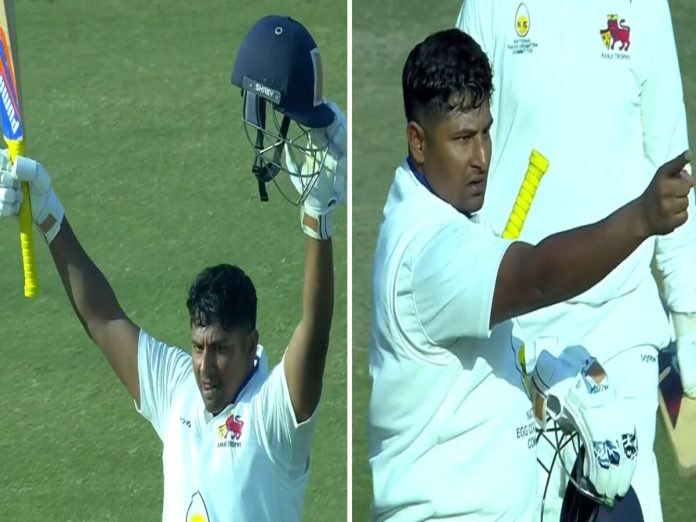 At the Arun Jaitley Stadium on Tuesday, Sarfaraz Khan scored his third century of the current Ranji Trophy 2022–23 season during Mumbai’s Round 6 match against Delhi.

With a single off Yogesh Sharma, Sarfaraz scored three runs off 135 balls. The right-hander struck an undefeated 126 against Hyderabad in December of last year and 162 against Tamil Nadu earlier this month.

Except for Prithvi Shaw, who scored 40 runs in just 35 balls, none of the other batters in the top order put up much of a fight. Sarfaraz and Mulani were tasked with getting Mumbai to a respectable total after Armaan Jaffer, and Ajinkya Rahane both got out in single digits.

The second-highest average in First-Class cricket history belongs to Sarfaraz. His astounding 80.47 average over 36 games is second only to the legendary Sir Don Bradman’s 95.14 average over 234 games.

The 25-year-old scored the most runs during the previous Ranji Trophy season, helping Mumbai advance to the final with 982 runs at an average of 122.75. In that season, he had four hundred, two half-centuries, and a maximum score of 275 against Saurashtra. Despite having outstanding results in domestic cricket, Sarfaraz has yet to receive an India call-up.

Also Read: I Was Told I’ll Get My Chance, Be Ready: Sarfaraz Khan, On Not Included In Test Squad