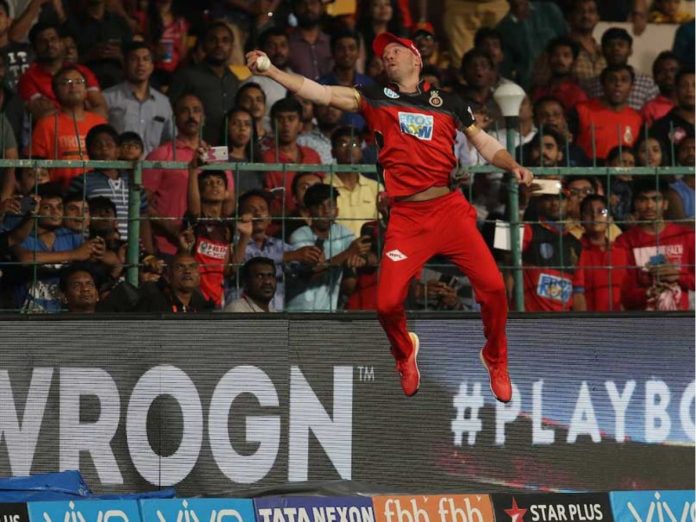 There is a saying that “Catches win you matches!”. This phrase holds true for every cricket game. Taking catches leads the team to victories and there is absolutely no doubt about this. Even in the Indian Premier League (IPL), we have witnessed several acrobatic and mind-boggling catches.

Some of these catches fall in the bracket of the greatest catches of all time as these catches are an epitome of a fielder’s athleticism, skill and judgement. Over the years in the IPL, we have witnessed some fabulous catches that have sent our heads for a spin.

In this article, we take a look at 5 of the most epic catches in the history of IPL since its inception in 2008:

The former South African legendary batter’s superhuman effort at the mid-wicket boundary line to dismiss Alex Hales of Sunrisers Hyderabad (SRH) in IPL 2018 tops our lost of all-time best catches in IPL. He plucked out one hand and pulled off an absolute blinder at mid-wicket. This catch was quite remarkable and was extremely hard to come to terms with. The skipper of the Royal Challengers Bangalore (RCB) franchise Virat Kohli was stunned and ran across the field to hug his teammate.

There is something about Australians and their ability to pull off some exceptional catches. One of these extraordinary catches was taken by Chris Lynn at the boundary rope in IPL 2014. Playing for Kolkata Knight Riders (KKR) in a match against Royal Challengers Bangalore (RCB), Lynn took the catch in mid-air while maintaining his balance so that he doesn’t touch the boundary rope. His arched back almost caused him to lose balance but he did well to control it and take a brilliant catch.

One of the best fielders of Indian cricket, Suresh Raina found his name on the record-books in IPL 2016 for a breath-taking catch at the slips. Raina leaped in the air to take a one-handed blinder to dismiss Surya Kumar Yadav of KKR. Notably, the southpaw took the catch with his right hand, which is not his batting hand.

The former Mumbai Indians’ (MI) talismanic all-rounder Kieron Pollard was an extremely fit fielder. In 2014 while playing against Rajasthan Royals (RR), Pollard took a stunning catch at long-on. He tried taking a one-handed catch before going to the other side of fence. Pollard made sure to put the ball in the air before losing his balance and going over the fence. He then dived forward to catch the ball in the end. One of the best IPL catches of all-time!

Playing for Lucknow Super Giants (LSG), Evin Lewis took a stunning one-handed catch while running towards to ball to dismiss a dangerous looking Rinku Singh. This catch got the best catch of the IPL 2022 season award and speaks volumes about Lewis’s stunning effort.