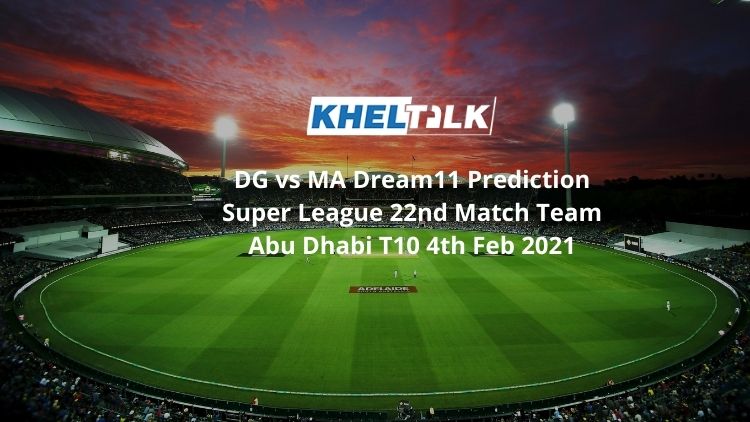 Here are the stats for the teams DG vs MA

The Surface at Sheikh Zayed will mostly favor the batsmen. Pacers have got no support from the pitch. Spinners might make some difference when the ball gets old.

Picking pacers in your fantasy team will not earn you enough points, rather go for spinners and top-order batsmen.

Gladiators sit at the sixth spot of the points table with just one in five games.

Gladiators are likely to step on the field with their previous playing 11 as they merely lost the game by 3 runs against Warriors.

Maratha Arabians have has the worst season so far. They are at the bottom of the points table with a single win in four games.

Maratha has failed to make an impact with any of their combination. There is a possibility, they might step up with the same playing 11.

M Hafeez has justified himself at the top order. Scoring 129 runs in 4 innings at a strike rate of 184.28 tells a lot about his potential.

Not just being economical with the ball, Zahoor khan has also chipped wickets at regular intervals. He has 6 scalps from 5 games at an economy of 8.33.

Yamin Ahmadzai is the only bowler to bag the maximum wickets for the side. He has 4 in four games at an economy of 12.00.

He can also do wonders with the bat, don’t miss him out.

He has been consistent with the bat for Arabians.

Here is the Dream 11 Team prediction for NW vs PD. We are going with players who are currently in good form and can win the match with ease.

Head To Head Team For Deccan Gladiators vs Maratha Arabians

Wicket-Keeper:  A Khan, A Shakoor

Wicket-Keeper:  A Khan, A Shakoor

Who Will Win Today Between DG vs MA Dream11 Prediction?

According to Kheltalk’s NW vs PD Dream11 toss prediction, DG will win the toss and will opt to bowl first.