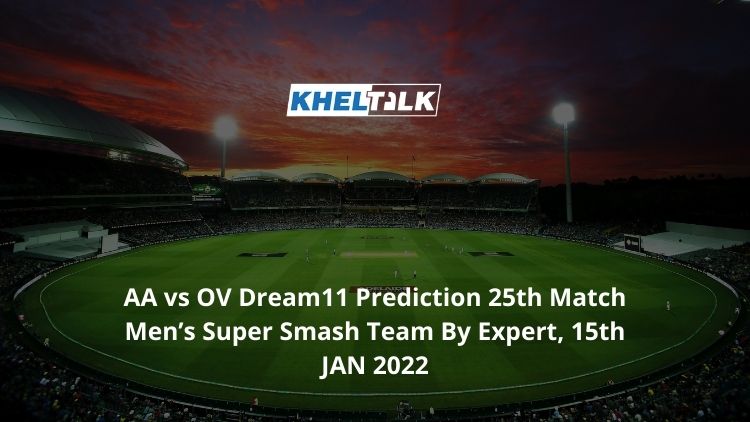 Welcome to AA vs OV Dream11 Prediction for Today’s Match Fantasy Cricket. Auckland will take on Otago Volts in today’s match of the Men’s Super Smash, 2021/22 on Saturday, 15th January 2022, at Auckland.. Keep reading to find out about the AA vs OV Dream11 team today.

Auckland Aces will lock horns with Otago Volts in the 25th match of the tournament. This is a must-win match for Otago Volts who are at the bottom of the table with one win from eight outings.

On the other hand, Auckland has three wins and as many losses from their six outings. The team is currently a spot above Otago in the points table. However, a win here will take them to 4th spot.

The pitch is comparatively a slower one and will assist the spinners and batters more. 170 will be a good score at this venue. Anything below the same is easy to chase here.

Weather is expected to be partly cloudy, and one can expect drizzles. However, the match is unlikely to get washed off. We might see a reduction in the number of overs.

Auckland Aces are likely to go in with the same line-up for the match. The team is in good form at the moment and a win here will take them to the 3rd spot.

Led by Hamish Rutherford, the team will look to regroup and bounce back in this contest. They must pull up their sock before it is way too late. Neil Broom is the player to watch out for here.

Glenn Phillips is likely to play this contest and if he does, he is an important pick here. He has played in two matches so far and has 67 runs with the best of 53. He strikes at 167.50 and has an average of 67 in the tournament.

George Worker showed a glimpse of form in the recent Ford Trophy match and he could turn vital for Auckland here. He has 144 runs from six matches with the best of unbeaten 53.

Lockie Ferguson has done well with the ball and is the current leading wicket-taker for the Aces with 10 wickets to his name. He has the best of 4 for 19 and has an economy rate of 6.87.

Anaru Kitchen can contribute from both fronts and is a must-have pick in the Otago Volts line-up. He has 145 runs from his seven matches while striking at 139.42. He also has picked up seven wickets in the tournament so far.

Neil Broom will look to bounce back to scoring ways here. He has done well in the Ford Trophy but couldn’t really get going in this tournament, something the team needs from him today. He has 132 runs in the tournament so far.

Hamish Rutherford is the current leading run-scorer for Otago Volts. He has 198 runs with the best of 82 while striking at 133.78. He also has picked up a couple of wickets in the tournament.

Who Will Win Today Between AA vs OV Dream11 Prediction, today’s match?

According to Kheltalk’s astrology AA vs OV Dream11 match Prediction, Auckland Aces are the favorites to win this contest. Auckland has done well in the tournament compared to Otago so far. The team also had managed to win their last head-to-head contest.

According to Kheltalk’s AA vs OV Dream11 toss prediction, Auckland is likely to bowl here. The teams chasing has more chances of winning this game.