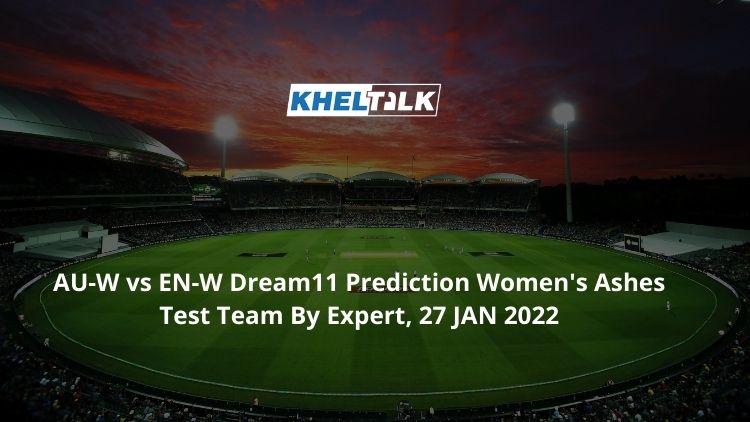 England and Australia will lock horns in the Ashes Test from January 27th. The Multi-format series witnessed Australia win the first T20I and then the next two matches got washed off and a point was awarded for both teams. At the moment, Australia leads the series with 4-2 points.

This is a proper Australian wicket. As we witnessed in the last contest in the WNCL, one can expect both teams to go short every single delivery and there will be a lot for the pacers initially. The wicket has good grass on top, indicating that it would assist the bowlers more.

Once again, the rain is all set to play the spoilsport in the Ashes series. According to the forecast, all four days will see a good amount of rain which is likely to influence the result.

Australia have included the ‘Manuka Oval’ specialist Stella Campbell as a replacement for the injured Vlaeminck. She is likely to feature in this contest. Megan Schutt, Rachael Haynes, Jess Jonassen are all set to return to the Test after missing the contest against India. Ellyse Perry, who was dropped from the T20I side, will play this contest.

Kate Cross, Lauren Winfield-Hill will return to the line-up after missing the T20I series. The team has added Lauren Bell into the squad and it will be interesting to see if she gets an opportunity. Sophie Ecclestone will lead the spin attack while the legend Katherine Brunt will lead the bowling.

Ellyse Perry is back into the side and will be raring to go here after missing the T20I series. She has an excellent record against England, including a double century. She is likely to dominate here once again.

Tammy Beaumont is in form of her life at the moment. She recently won the best ODI player of the year 2021 and she ended the year with an average of over 50 across all the formats.

Sophie Ecclestone was England’s best bowler in the T20I series. A few days ago, she picked up seven wickets in the Intra-squad match and will be raring to go here once again.

Meg Lanning played well in the first T20I match and is likely to perform well here too. She had a half-century in the first contest and one can expect her to come good here.

Tahlia McGrath is having an outstanding season. She was the top performer in the India series and then she led Strikers to the final in the recently concluded WBBL. This year, she smashed an unbeaten 91 in the first T20I. She is a must-have pick among all-rounders along with Nat Sciver.

Megan Schutt is back into the side and is likely to open the bowling for Australia. The legend wasn’t upto the mark in the T20I series but is a different bowler when it comes to this format.

Rachael Haynes is back into the Test team after missing the contest against India. The veteran didn’t get an opportunity to bat in the T20Is and will be looking to dominate here. She had a couple of tons in the recent List-A matches.

Who Will Win Today Between AU-W vs EN-W Dream11 Prediction, Match 1?

According to Kheltalk’s astrology AU-W vs EN-W Dream11 match Prediction, the match is likely to end in a draw. Since rain is likely to play the spoilsport, it is going to be difficult for both teams to fight for a result here.