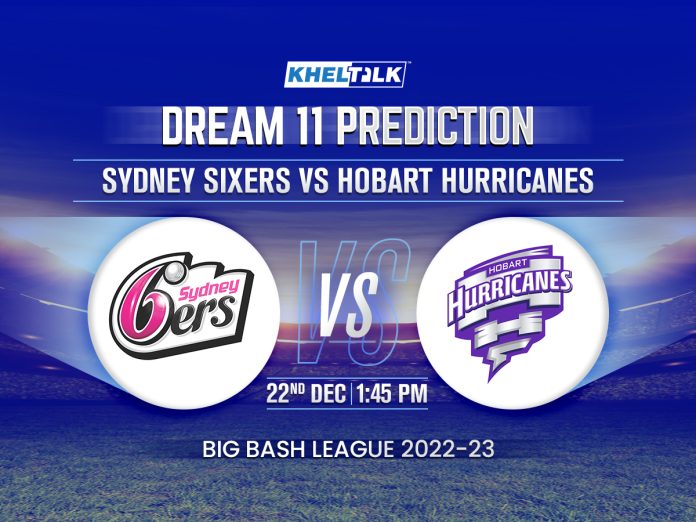 Sydney Sixers will be locking horns with Hobart Hurricanes tomorrow at 1:45 PM (IST). The match will be taking place at the iconic Sydney Cricket Ground (SCG) and is a match with a lot of stakes in the Big Bash League (BBL 2022-23).

Hobart Hurricanes won their previous game against Perth Scorchers and they would be brimming with confidence. On the other hand, Sydney Sixers has got off to a bad start in the Big Bash League (BBL) 2022-23 and have lost both their opening 2 games. They are coming on the back of a loss against Perth Scorchers.

Choosing the right captain in a Dream11 game is extremely important as you get twice the number of points. The game between Sydney Sixers and Hobart Hurricanes is filled with super-stars and making the right captaincy pick should be of utmost importance to you.

In this article, we take a look at 3 players whom you can make captain in your Dream11 team in the Sydney Sixers vs Hobart Hurricanes game:

Swashbuckling wicket-keeper batter and skipper of Hobart Hurricanes Matthew Wade will be a great captaincy option in this game. He scored a blistering knock of 51 (29) in the previous game and his knock was packed with 5 fours and 2 sixes. Making him captain in your fantasy game for this BBL 2022-23 game will be a prudent decision.

Getting a wicket in Dream11 gives you 25 points. Therefore, if you have a proper wicket-taker in your team, it will fetch you a lot of points. Patrick Dooley bagged the player of the match award in the previous game. He took 4 wickets in the previous game and will be a key player to watch out for in this game.

Jackson Bird bagged 3 wickets in the previous game of Sydney Sixers against Perth Scorchers. He can be a good captaincy option considering his pace and consistent line and lengths. If not a captain, you can also make him a vice-captain.