The first few games of the Lanka Premier League has seen plenty of action and expect more sparks to fly as Colombo Kings take on Dambulla Viking. These two teams are sitting at the top of the points table and have looked in great form. Colombo has won both their games so far while Dambulla has also won their only match played so far. As both teams have been undefeated in this contest so far, this game should be very interesting. Let’s go through our Dream11 Prediction for the upcoming Lanka Premier League game between CK and DV.

The pitch will be a heaven for batsmen as it is fairly flat and there is hardly any movement off the deck. The ball will come nicely on the bat and the bowlers will have to be disciplined to make an impression in this contest.

All-rounders:  A Mathews, I Udana

A Russell was in full flow in the last game as he blasted 65 runs off just 19 balls. He hammered 9 fours and 4 sixes in that innings and hence is the big player for this match. Russell is arguably the most destructive batsman in T20 cricket and averages 27.07 in T20s. The West Indies international has experience of playing in 289 T20 innings and has a strike-rate of 170.28. He has scored 22 fifties and 2 hundred. He is also a handy bowler and has a strike-rate of 18.8 in bowling.

L Evans has made a headline-grabbing score in the LPL yet. However, he has made contributions in both games he has batted so far. In the first match, he scored 22 runs from 14 balls, and in the second game, he managed 21 runs from just 10 balls. Considering his aggressive intent and positive form, he can be expected to make a big score in this match.

Dinesh Chandimal showcased his batting prowess in the first game by scoring 80 runs from 46 balls and hammered 12 fours and 2 sixes. The right-hander batsman averages 29.27 with the bat in 126 T20 games and has a strike-rate of 119.25. He also has 19 fifties and 1 hundred. He is opening the innings for his team and has a good chance to add to his runs tally as he can make good use of the Powerplay overs.

CK vs DV Dream11 Prediction: Who will win the match

The batting firepower of Colombo is simply outstanding and this is their biggest strength. So in this game too, they will be expected to defeat Dambulla. 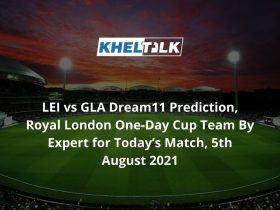