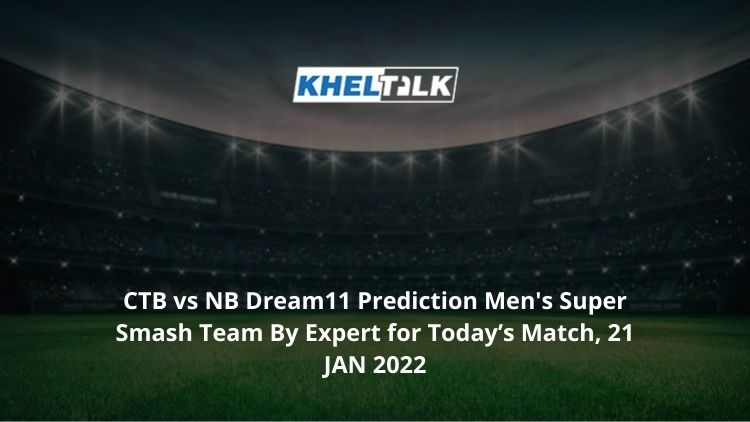 Welcome to CTB vs NB Dream11 Prediction for Today’s Match Fantasy Cricket. Canterbury will take on Northern Brave in the Men’s Super Smash, 2021/22 on Friday, 21st January 2022, at the Christchurch, Keep reading to find out about the CTB vs NB Dream11 team today.

Canterbury and Northern Brave will lock horns for the 2nd time in the tournament. The last time these two teams met, Brave produced a thrilling one-wicket victory. Canterbury made just 107 runs and Brave had lost initial wickets but eventually got there in the final delivery.

There is not much to separate between both teams. Brave have won six out of their eight matches with one loss to their name while Kings have won six and have lost two. They are in the first two spots of the points table respectively.

This is a good batting pitch and both teams will prefer chasing at this venue. The toss will play a crucial role here. Anything below 130 is easy to chase at this venue.

The weather is expected to be partly cloudy at this venue. There is a good chance of rain once again. It will be interesting to see if it take over the complete match.

Canterbury will be glad to have Tom Latham, Daryl Mitchell and a few other international stars back into their line-up. Tom Latham recently had an excellent series against Bangladesh and will be raring to go here.

Led by Jeet Raval, Northern Brave will see the return of Trent Boult in the team. They will be hoping that Colin de Grandhomme continue his good form in this contest as well.

Tom Latham has played one match so far here and has scored 34 runs while striking at 178.94. He will be keen to convert his starts to a big score in this contest.

Cam Fletcher is the second leading run-scorer for his team with 221 runs from eight matches. He has an average of 44.20 while striking at 147.33. He has two fifties to his name.

Trent Boult has been named in the squad and is likely to feature in this contest. So far, he has played two matches and has two wickets to his name while giving away 5.71 runs per over.

Colin de Grandhomme is in excellent form at the moment and has scored a ton, a fifty, and a forty-plus in his last three matches. Overall, he has 205 runs from his seven matches in this tournament.

Daryl Mitchell is back into the side and will be raring to go here. He has 30 runs in the tournament so far with a strike rate close to 137. He is likely to roll his arms for a few overs here.

Ed Nuttall was the star performer in the last head-to-head contest. He has 15 wickets overall while giving away 9.10 runs per over. He could be the difference between the two sides here.

Who Will Win Today Between CTB vs NB Dream11 Prediction, today’s match?

According to Kheltalk’s astrology CTB vs NB Dream11 match Prediction, Northern Brave will begin this contest as favorites once again. Either way, this match is likely to be a close one just like the previous head-to-head match.

According to Kheltalk’s CTB vs NB Dream11 toss prediction, Canterbury is likely to bowl here. The teams batting chasing has won more games at this venue.