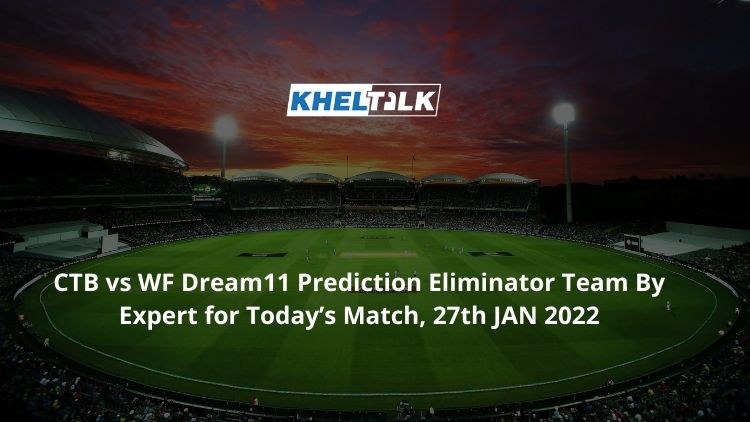 Welcome to CTB vs WF Dream11 Prediction for Today’s Match Fantasy Cricket. Canterbury will take on Wellington in Eliminator of the Super Smash, 2021/22 on Wednesday, 26th Jan 2022, at the Dunedin. Keep reading to find out about the Eliminator CTB vs WF Dream11 team today.

Canterbury and Wellington will lock horns in the Eliminator of the tournament. The winner of this contest will meet Northern Brave in the final on 29th January in Hamilton. Canterbury ended their group stage with seven wins to their name and as they finished second, they get to host the Eliminator. The team had won their last head-to-head contest.

Wellington, on the other hand, had five wins and as many losses in the tournament. They had won the first head-to-head contest against Canterbury and in fact, in the last five matches, Canterbury has two wins while Wellington has three.

The surface will assist the batters more and this match is likely to be a high-scoring one. Both teams are likely to go for chasing here as the pitch will not change much during the course of the game.

Rain is on cards on Wednesday. The temperature will be around 17 degrees Celcius with humidity close to 80 per cent. It is going to be a tough day for both teams.

Canterbury are yet to announce the final squad for the Eliminator. Going by what we have seen so far, the team is likely to feature all their main men and Matt Henry will be the player to watch out for here.

Star players like Devon Conway, Rachin Ravindra, Jimmy Neesham are available for this contest. Apart from them, the regular stars Finn Allen and Bracewell will play this contest too, making Wellington a team to watch out for here.

Daryl Mitchell is likely to feature in his contest. The all-rounder has played three matches so far and has scored 129 runs with the best of unbeaten 68. Mitchell also has picked up a wicket in the tournament so far.

Tom Latham will open the innings for the team. The keeper has 134 runs with an average close to 45 in the tournament so far. He will be looking to give his team a good start for sure.

Chad Bowes is the leading run-scorer for Canterbury Kings this season. He has 263 runs from his ten matches with three fifties to his name. He has 32 fours and seven sixes so far.

Matt Henry will lead the bowling attack here. The experienced pacer has 12 wickets in the tournament while giving away 7.68 runs per over. He will look to give the team early breakthrough here.

The Skipper Bracewell is a must-have pick here. He has 397 runs with an average close to 80. In one of the contests, he smashed unbeaten 141 runs and has four fifty-plus scores in the tournament. Bracewell also has managed to pick six wickets here.

Finn Allen averages close to 27 in the tournament. He will open the innings for Wellington and so far, he has 268 runs with a strike rate close to 198.

Devon Conway will play in this contest. The opener is yet to perform big here and has scored just seven runs from two matches. He will be keen to bounce back to scoring ways in this contest.

Who Will Win Today Between CTB vs WF Dream11 Prediction, sixth match?

According to Kheltalk’s astrology CTB vs WF Dream11 match Prediction, Wellington will begin this contest as favorites. Though Canterbury has won their last head-to-head contest, Wellington is likely to dominate here, thanks to the return of their main men.

According to Kheltalk’s CTB vs WF Dream11 toss prediction, Wellington is likely to bowl here. The teams batting chasing has won more games at this venue.