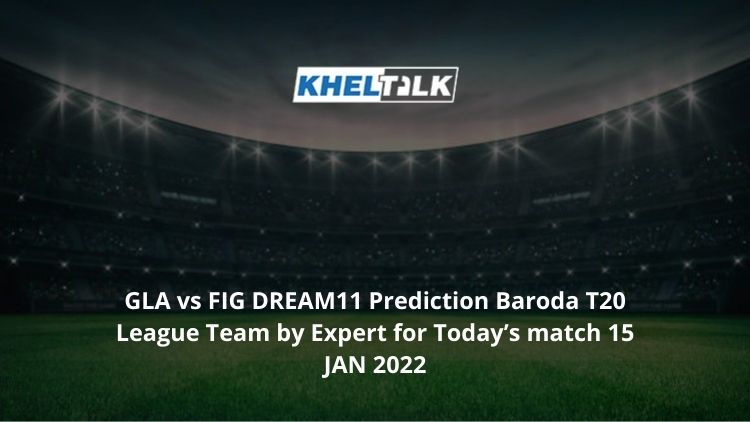 Welcome to GLA vs FIG Dream11 Prediction for Today’s Match Fantasy Cricket, Fighter will take on the Gladiator in the Baroda T20 League today’s match on Saturday, Jan 15, 2022, at Vadodara. Keep reading to find out about the GLA vs FIG Match Dream11 team today.

Fighter began the tournament with a loss but had managed to defend 94 against Stallions. In their last contest, they went down to Challenger, who chased down 117 with seven wickets in hand.

The pitch is a good batting track and if Gladiators bat first, it is going to be a high-scoring contest. Anything below 145 is easy to chase at this venue.

The weather will be sunny throughout the day. The temperature will be around 24 degrees Celcius during the contest and there is no chance for rain. Batters will have full support from the weather.

The team has a good bowling line-up but their batting has been poor throughout the tournament and they must look to bounce back here. This is more of a must-win game for the team and all eyes will be on Bhavishya Patel.

Gladiator are the best team in the competition and have managed to win all their matches so far. They will look to dominate once again and one can expect them to go in with the same playing eleven here.

Shubham Jadhav is the leading run-scorer of the tournament at the moment. He has 211 runs from just five matches with the best of 76. He averages close to 43 and has 10 sixes to his name. He strikes at 131.06.

Kinit Patel will look to convert his starts to big scores here. He has managed to score 20-plus in almost all matches but couldn’t get to that fifty-mark. He has scored 174 runs from just five matches.

Malhar Ghevariya is the leading wicket-taker at the moment. He has 11 wickets to his name from just five outings. He has a strike rate lesser than 11 and has an economy rate of 5.85 here.

Ghalimatte will look to lead the team from the front here. He can contribute from both fronts and is the current leading run-scorer of Fighters with 118 runs to his name. He has 10 fours and 1 six in the tournament so far.

Prince Prajapati has done well with the ball and is one of the must-have picks here. He has 11 wickets from his five outings with an economy rate of 5.85 in the tournament.

Who Will Win Today Between GLA vs FIG Dream11 Prediction, Today’s match?

According to Kheltalk’s astrology GLA vs FIG Dream11 match Prediction, Gladiator will begin this contest as favorites. The team is currently unbeaten in the tournament so far and they will look to continue their good form here.

According to Kheltalk’s GLA v FIG Dream11 toss prediction, Gladiators will win the toss and they are likely to bowl first in this contest. Since most matches went to the team batting second, the teams will opt to bat second here.