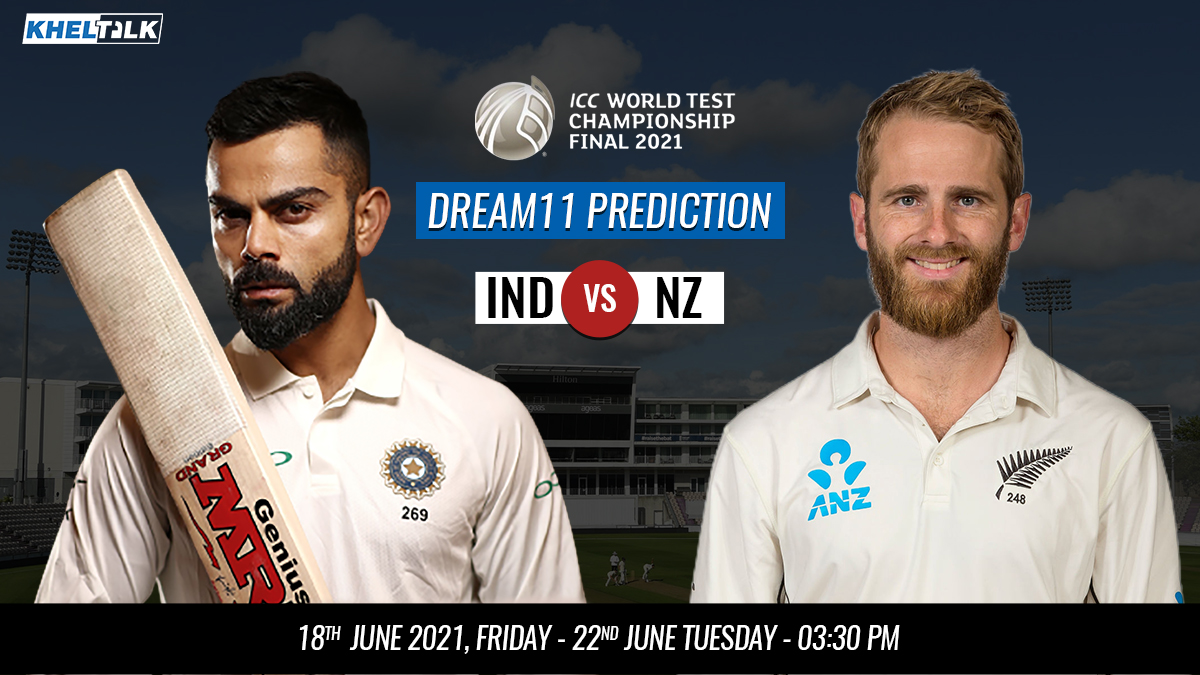 India and New Zealand will lock horns in the World Test Championship Final on 18th June 2021. New Zealand will enter this contest with confidence after a brilliant series win against England. New Zealand won the two-match Test series 1-0. Most importantly, the team won the match without their main players including Kane Williamson.

The Kiwi skipper had to miss out on the final Test match against England due to an elbow niggle and will be back for the final here. This is certainly a big boost for the team considering the fact that there isn’t a lot of superstars available in the team. Perhaps Ross Taylor could be called a superstar but other than that most of the batters are comparatively inconsistent.

On the other hand, India’s last Test was against the same opponent, England. Since then, most of the Indian players went on to play Indian Premier League but had to return home after a few games because of the bio-bubble breach.

However, the team did play an intra-squad match and most of the top players found themselves among runs and wickets, something, the team will be glad about going into this contest.

When these two teams met in Test cricket, New Zealand went on to win the series 2-0.

Most runs for India in Tests among current players

Most wickets for India in Tests among current players

Most runs for New Zealand among current players

Most Wickets for New Zealand among current players

Recently, the head groundsman of the venue, Simon Lee hinted that the pitch is likely to have ‘some pace, bounce and carry’. Usually, Southampton pitch is a slower one and had provided something for the spinners and the batters had some runs too. The average first innings total here is 337 and out of six Test matches here, two of them went to the team batting first while one went to the team batting second.

The temperature is likely to be around 17 to 20 degrees Celcius during the match time. While most of the days are likely to remain sunny, one can expect short spells of rains on day 1, day 2 and day 4. Also, the conditions on Day 1 are likely to be harder as rain is on the forecast on June 17th.

India had dropped KL Rahul and Mayank Agarwal indicating that Shubman Gill would be opening with Rohit Sharma. Virat Kohli, Cheteshwar Pujara, Ajinkya Rahane, Hanuma Vihari, Rishabh Pant will form the middle order while Jasprit Bumrah, Ishant Sharma, and two bowlers among Shami, Yadav, and Siraj are likely to form the lower order. Ashwin is likely to play ahead of Jadeja. The team might prefer both Jadeja and Ashwin, meaning, either a pacer or Hanuma Vihari will sit out.

New Zealand will be glad to have Kane Williamson, BJ Watling back into the side. Both players missed the final Test match against England due to injuries. Ajaz Patel, who impressed everyone in the final Test, is likely to play in this contest. Devon Conway and Tom Latham will once again open the innings followed by Kane Williamson, Ross Taylor, BJ Watling, and Henry Nicholls. Ajaz Patel, Tim Southee, Neil Wagner, and Trent Boult will form the lower order while Colin de Grandhomme will be the pick from the all-rounders.

Virat Kohli has an excellent record against New Zealand. The Indian skipper average 51.53 against the Kiwis and has scored 773 runs from nine matches. He has three tons and as many fifties to his name. Also, he is in decent form at the moment.

Rohit Sharma is likely to lead the batting for the team. He averages 60 against New Zealand and has scored 360 runs from his five matches with four fifties to his name. He also was the leading run-scorer in the recently concluded Test series against England.

Kane Williamson will look to add more runs to his tally. He has played only two Tests in 2021 so far and has scored a double ton in one of the matches. The Kiwi skipper average close to 65 at neutral venues and against India, he has made 728 runs from his 11 matches.

BJ Watling will be playing the final match of his career and will be looking to end on a high here. The Kiwi wicket-keeper has 3789 runs in his Test career and has scored eight tons and 19 fifties while averaging 37.89.

Devon Conway has had an excellent start to his Test career and was the player of the series in the recently concluded Test series against England. Conway averages close to 75 from his two Test matches and have the best of 200.

Neil Wagner is likely to trouble the Indian batters with his trademark short deliveries. Wagner has 226 wickets from 53 innings in his Test career so far.

The condition is likely to help Trent Boult here. The pacer has 287 Test wickets and against India, he has picked up 36 wickets. In the last outing against England, Boult has picked up six wickets.

Who Will Win Today Between IND vs NZ Dream11 Prediction, Test 1 ?

According to Kheltalk’s astrology IND vs NZ Dream11 match Prediction, the match is likely to be a draw. Since both teams have a well-balanced line-up, we can expect them to fight until the last moment. However, it all depends on bowlers here.

According to Kheltalk’s IND vs NZ Dream11 toss prediction, New Zealand is likely to bowl first since the pacers are likely to dominate here. The team will look to make use of the initial session and the new ball and are likely to bring in their A-game today.