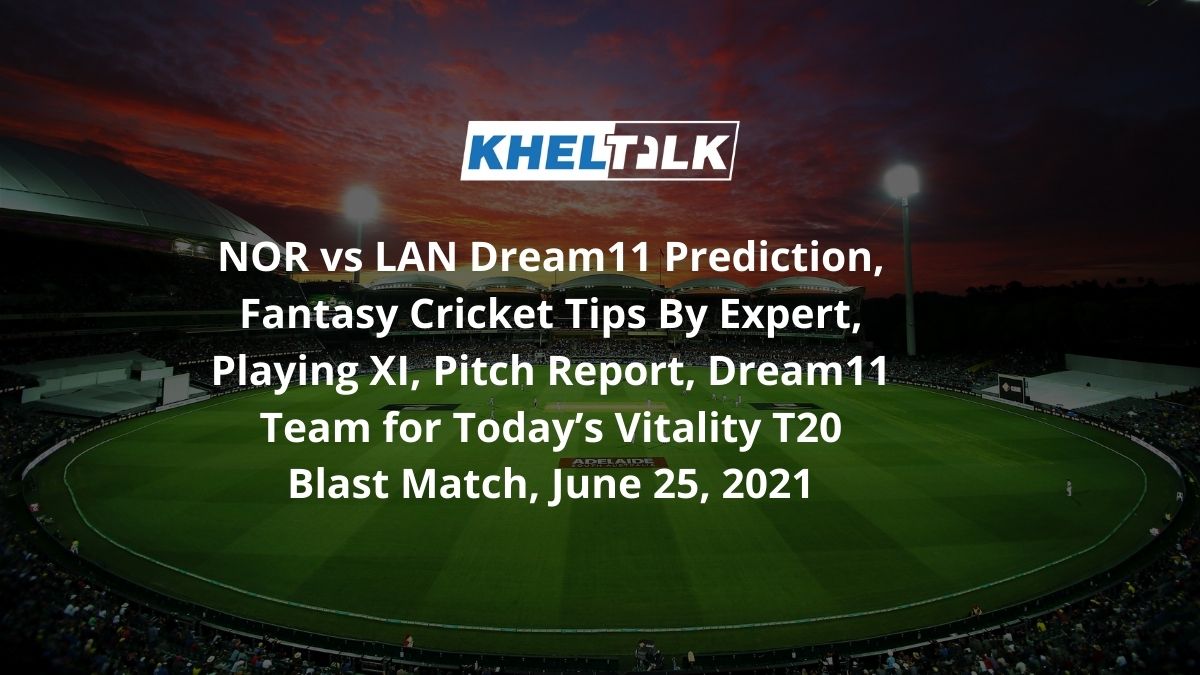 Northamptonshire are having a disastrous tournament so far. They are at the bottom of the North Group and have won only one match so far. They need something special to stay in the tournament if not for that, at least to pull other teams down.

Lancashire, despite having a star-studded line-up, have managed to win only three matches from their seven. They have lost two, and one match was washed off by rain. It will be interesting to see how they go here considering the fact that they are under a bit of pressure to do well today.

In the last three encounters between these two teams, Lancashire have won two matches while Northants had a win to their name but that came in 2018.

NOR vs LAN Dream11 Match Prediction

This is a batting-friendly pitch and most of the teams prefer batting first here as the pitch gets slower in the second half of the game. In fact, in the four matches that the venue has hosted, all of them went to the team batting first. The average first innings score from the last five match is 189.

We are going to witness a bit of sun after a long time at Northampton. According to the forecast, the temperature will be around 14 degrees Celcius and are likely to go up to 18 degrees Celcius. There is a ten per cent chance of rain.

Ever since Wayne Parnell was promoted up the order, he was able to add useful runs to the total. Apart from Parnell, none of the players had performed big and the team will be hoping for something special here. Among all the batters, Richard Levi has been a disappointment so far and will be sitting out of the contest, most likely.

The team has a star-studded line-up in the form of Finn Allen, Alex Davies among others. Though they will be missing out Jos Buttler and Liam Livingstone, they will be glad to have Keaton Jennings who can fill in for the void.

Finn Allen is a must-have pick here on the fantasy side. The Kiwi opener has scored 197 runs from his six outings so far. He averages close to 40 and has a strike rate close to 143. He is likely to give the team a brisk start here.

Keaton Jennings is back into the team after a long time and he is certainly their best player. With vast experience, Jennings knows how to handle situations. He so far has played a match and has smashed 88. He had four sixes and as many fours there.

Mohammad Nabi needs no introduction. The Afghanistan cricketer is likely to dominate in this contest and can contribute from both fronts. He so far has a couple of wickets while giving away just 6.91 runs per over and also has a few runs on the board.

With an economy rate lesser than eight, Parnell could be the star of this game. He so far has picked up four wickets and also has scored a few useful runs here. He averages close to 20 and will play the finisher role for the team.

NOR vs LAN- Top picks by experts

Vasconcelos is the team’s best player for more than a year now irrespective of the format. He proved that once again and is in good touch at the moment.

Head to Head Dream11 Team Prediction NOR vs LAN

Who Will Win Today Between NOR vs LAN Dream11 Prediction, North Group?

NOR vs LAN Toss Prediction today