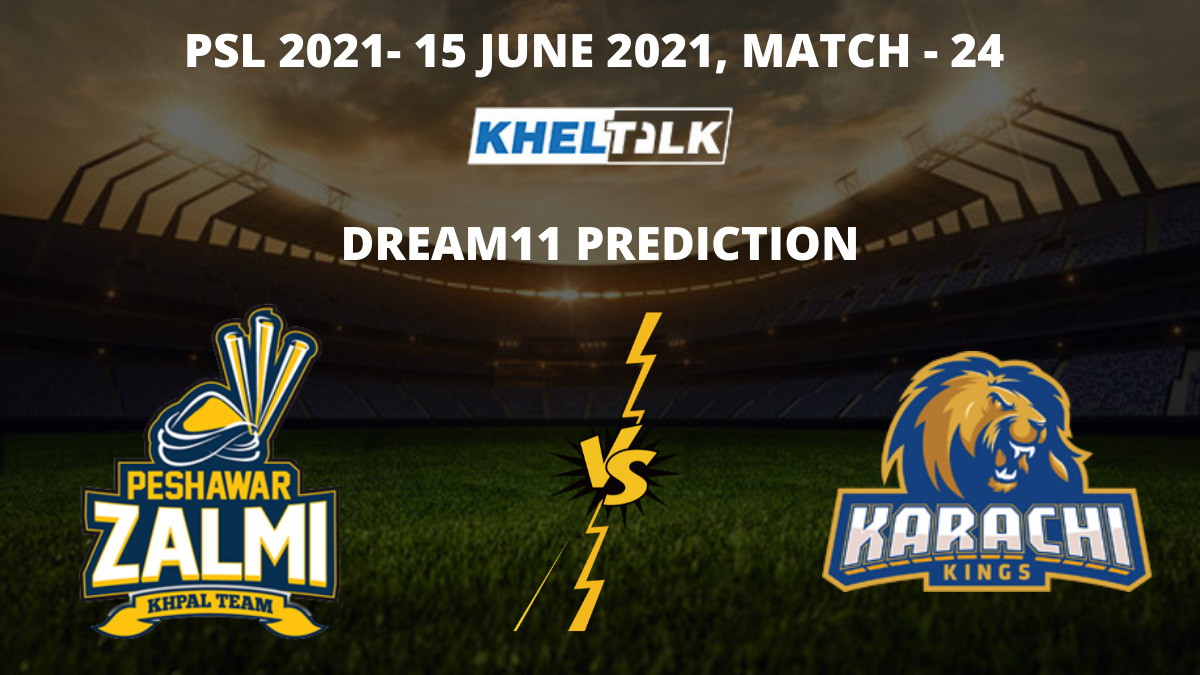 Welcome to PES vs KAR Dream11 Prediction for Today’s Match Fantasy Cricket. Peshawar Zalmi will take on Karachi Kings in Match 22 of the PSL 2021 on Monday, June 15, 2021, at the Sheikh Zayed Stadium, Abu Dhabi. Keep reading to find out about Match 24 between PES vs KAR Dream11 team today.

Peshawar Zalmi would next lock horns with Karachi Kings in their next fixture of the Pakistan Super League on Thursday. Both the teams have had a mixed tournament so far. Playing eight games, Peshawar Zulmi has won four which makes them grab the third spot on the standings, meanwhile, Karachi Kings are just below with three wins from six games. Both the teams will be desperate for a win here as it will help them keep their spots on the table. Here we have come up with the PES vs KAR Dream11 Team for this Pakistan Super League fixture.

The surface at Abu Dhabi has been good sporting turf as it has got everything that pacers, spinners, and batters need. Batting second is a better option here. Most of the games at night are high-scoring ones. The average first inning score at this venue is 167.

The temperature in Abu Dhabi is expected to be around 34 degrees Celsius. The humidity will mostly be in the 50s with no chance of rain at all.

Pesharwar Zulmi will surely come up with few chances for the upcoming game. Bowlers were highly disappointing in their last game against Sultans. Defending 166 runs was a doable job, however, Sultans top order had some other plans and with eight wickets in hand, Sultan reached the target with 21 balls remaining.

Even Karachi Kings couldn’t find a way out in their previous game against Sultans. Chasing down 176 runs on the board. Despite Babar Azam heroic innings, Kings found themselves on the losing side. They fell short by 12 runs. Changes are expected. Currently, they are playing against United and looks in great touch.

Wahab Riaz and S Mahmood have been consistent with the bowl. So far, they have chipped 11 and 12 wickets respectively. It is never easy for the top order to settle in their spell. They are likely to be lethal again. Don’t miss them out.

S Rutherford is the highest Run-getter for Peshawar. Playing eight innings, he has scored 210 runs at an average of 35 including 11 fours and 15 sixes.

Babar Azam has been exceptional with the bat for the Kings. Opening with the bat, he has given several memorable starts. Don’t forget his previous innings against Sultan. So far, he has scored 386 runs from seven innings with the highest score of unbeaten 90.

Arshad Iqbal and Waqas Maqsood have chipped six wickets alike for the Kings and have been quite economical as well. They both have been effective in the middle order.

Who Will Win Today between PES vs KAR Dream11 Prediction, 24th Match?

According to Khel Talk’s prediction for LAH vs ISL Dream11 Match Prediction, PES are expected to win this fixture. Peshawar has a great bowling line up meanwhile, the Kings have better batsmen to their side. This will surely be a close contest.

According to Kheltalk’s PES vs KAR Dream11 Toss Prediction, Peshawar Zulmi would win the toss and elect to bowl first. Batting second is a better option here as the chase gets easier at this venue