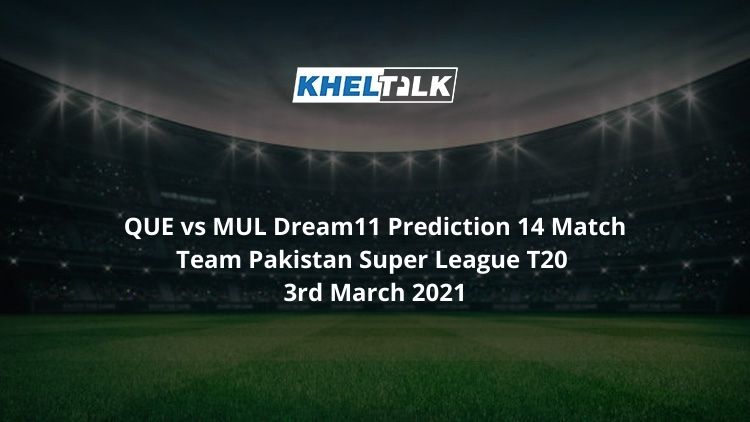 Here are the stats for the teams QUE vs MUL:-

The surface will be well favourable for the spinners and batsmen might find it hard to chase at this venue. Anything between 160 to 180 will be easily defendable.

No possibility of rain with humidity expected to be on the lower side. The temperature will be excellent, a good day for cricket.

All-rounders can grab us points from both fronts, thus, can be trusted here on the fantasy side.

With some experienced players in the line-up, the squad do look good on papers.

Despite having some of the stalwarts of the game, QUE are struggling in the contest and are yet to win a match. They did come close on multiple occasions but had lost their way in the end. Gayle will miss this contest as he will be a part of the West Indies international series.

This is one of the powerful squads in the tournament, thanks to the likes of Tanvir, Afridi, Lynn among others. Rizwa once again will lead the team from the front here.

Here are a few predictions for the captain pick for the QUE vs MUL clash.

Sarfaraz Ahmed: The Skipper is in good form and had scored a couple of cameos along with two fifties to his name. We can expect him to do well here as well.

Mohammad Rizwan: He is in form of his life at the moment and has managed to score at least forty runs in almost every single match he had played in recent times.

James Vince has successfully carried his BBL form into PSL and is one of the leading run-scorers in the tournament at the moment.

Faf Du Plessis will be leading the batting attack of QUE team. He is in good form with a couple of cameos to his name.

Here is the Dream 11 Team prediction for QUE vs MUL. We are going with players who are currently in good form and can win the match with ease in our Head To Head & Grand League

Head To Head Team For Quetta Gladiators vs Multan Sultans

Who Will Win Today Between QUE vs MUL Dream11 Prediction, 14th match?

According to Kheltalk’s astrology QUE vs MUL Dream11 match Prediction, MUL will win the match.

According to Kheltalk’s QUE vs MUL Dream11 toss prediction, MUL will win the toss and ask MUL to bowl first.