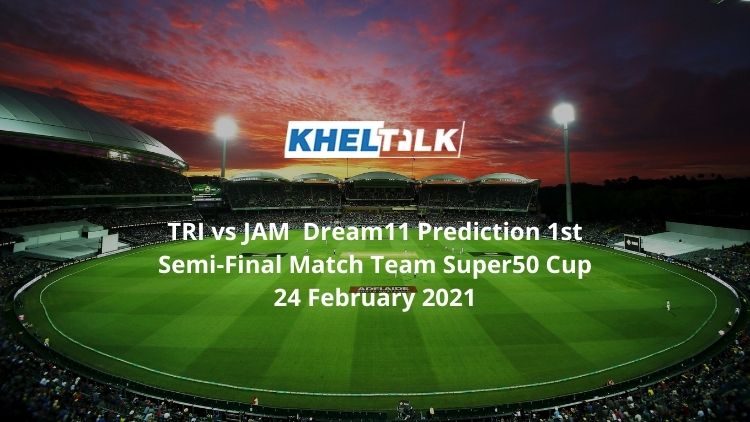 It is time for the knockouts in the Super50 Cup as T&T Red Force would lock horns with Jamaica Scorpions in the first semi-final of the competition on Wednesday. T&T Red Force have been on a dominating run in the tournament so far. They finished the league stage unbeaten with 5 wins in 5 matches. Jamaica Scorpions, on the other hand, have had a mixed-run in the tournament.

They finished 4th in the league with only 2 wins and 3 losses in 5 matches. T&T Red Force defeated Jamaica Scorpions by 5 wickets when these two sides met earlier in the tournament. They would look to repeat the same and continue their winning run to enter the final. The Scorpions, meanwhile, would try to avenge their loss and register a stunning win to take another step towards the championship. Here we have come up with the TRI vs JAM Dream11 Team for this Super50 Cup fixture.

The surface has been assisting both batsmen and the bowlers so far. The team winning the toss would like to bat first as the chasing has been difficult so far.

The weather is likely to be sunny with 62% humidity. The temperature level is expected to hover around 27 degree Celsius.

Kieron Pollard missed the last game, he could also sit out in this one.

Jason Mohammad has scored a total of 285 runs in 5 matches for T&T Red Force at an average of 95. He also picked up 4 wickets with the ball for his side.

Andre McCarthy has piled up a total of 156 runs in 5 matches for the Scorpions so far. The all-rounder has also accounted for 8 wickets with the ball.

Fabian Allen has scored 116 runs and picked up 4 wickets as well in 5 matches for Jamaica Scorpions.

Imran Khan has accounted for 7 wickets in just 3 matches for T&T Red Force at a strike rate of 20.7.

Rovman Powell has scored 125 runs and picked up 4 wickets as well in 5 matches for the Scorpions.

Brandon King has scored 135 runs for the Scorpions in 5 matches.

BOWL: A Phillip, I Khan, A Hosein

Who Will Win Today between TRI vs JAM Dream11 Prediction, First Semi-Final?

According to Khel Talk’s prediction for TRI vs JAM Dream11 Match Prediction, T&T Red Force are likely to win this match and advance to the final.

According to Kheltalk’s TRI vs JAM Dream11 Toss Prediction, Jamaica Scorpions would win the toss and elect to bat first.