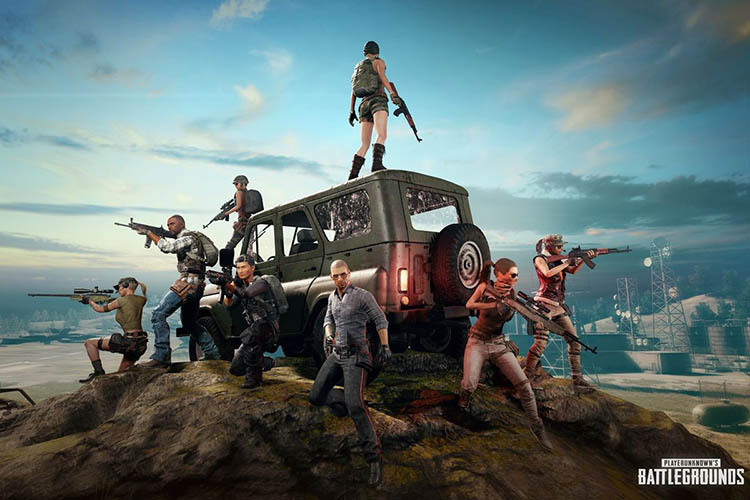 In this article, we are going to talk about the 10 most popular online games in the world. Online gaming has taken over the internet for a long time now. These are played not only by casual gamers but also by professional gamers to win leagues and tournaments. Here are the most popular games of 2020.

PUBG is by far one of the most played games of 2020 and easily takes the #1 spot in the list. Available on Xbox, Windows, Android, and iOS, this multiplayer game has created a storm on the internet across the world. PUBG can be played by a total of 100 players at a time.

This popular game, based on H1Z1, has exceptionally high-quality graphics.

The players start their mission on a remote abandoned island where they are presented with a realistic situation and a map. With the opponents hiding across the map, the goal of a player is to eliminate the competition by assassinating all enemies and be the final survivor.

Counter-Strike has been in the online multiplayer gaming scenario for many years now. CS: GO is one of the popular versions of Counter-Strike where terrorists and counter-terrorists form two teams.

This multiplayer First-Person Shooter (FPS) game is played on a map where the players are presented with multiple tasks like planting or diffusing a bomb, guarding or rescuing the hostages, and securing the team’s locations. CS: GO offers several maps that a player can choose to participate in.

Over time, the CS community has built multiple strategies to eliminate the enemies and win the game with cash and other prizes as rewards.

Fortnite Battle Royale is a strategy action game of survival that has been around since 2017. While the game became rose into prominence in 2018, it did not reach the level of popularity that PUBG has managed to. This is mainly due to being more popular across male players while PUBG is played by all genders alike.

This game is compatible with Nintendo Switch, Xbox One, Android, Windows, PS4, and iOS. Fortnite Battle Royale can hold up to 100 players per game where players can play solo or participate in groups of two or four.

The objective of a player this Third-Person Shooter game is to kill the enemies and be the last person standing. The game comes with outstanding VFX, features, gears, and missions to engage the players.

Minecraft is a popular 3D sandbox game that is getting more and more traction with each new version.

This game comes with major modes like Survival Mode, Creative Mode, Adventure Mode, and Spectator Mode. The goal of the player in this game is to expand their area, take control of people, animals, and food, and survive.

One of the most unique features of this game is that it does not impose many restrictions and the players have more freedom to play and build strategies according to their wishes.

League of Legends, like Counter-Strike, has been around for several years now. But the game remains to be the favorite among its old players and the new ones.

LOL is a multiplayer Role-Playing Game (RPG) where a player can control their “champion” and play against other champions to win.

The VFX of this game has become better with time and new releases.

DOTA 2 is another online multiplayer game by Valve. This game is extremely popular across the world where leagues and tournaments are held by the gaming communities with cash prizes and other rewards.

This strategy game has exceptional graphics quality along with rewarding gameplay.

The Division 2 is a third-person game where a civil war takes place between the survivors and a series of enemy marauders.

A player can join another player to accomplish missions in this game. Up to eight players can play to complete an objective or a raid.

Splatoon 2 is a third-person shooter game created by Nintendo and is compatible with Nintendo Switch only.

The Inklings and Octolinks spray colored inks over the available map area to complete objectives. This game has unusual gameplay where the two characters can transform between social forms and use ink as a weapon.

Available in multiplayer and single-player modes, this game can have up to four people in each team.

Apex Legends is a battlefield genre game for players who don’t enjoy playing Fortnite or PUBG.

The game allows six players in total where a team of three is put on a desolate island to find resources and eliminate the enemy squads. It earned a place in superhero-themed video games in 2020.

Hearthstone is a free online card game by Blizzard Entertainment that is available on Windows, iOS, and Android. The game started as an experiment that blew up and became popular among its players in recent years.

In this game, there are different houses and different powers and players win by collecting cards and reducing the opponent’s health.