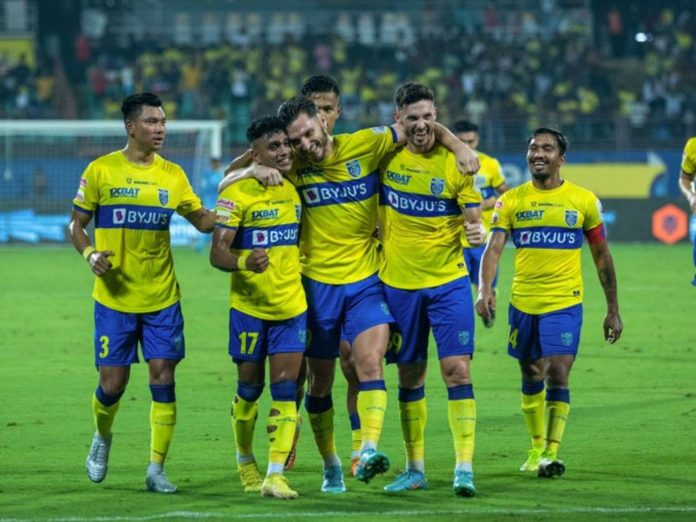 Ivan Vukomanovic’s men once again put on a splendid performance in the ongoing Indian Super League (ISL) tournament as they beat Jamshedpur FC 3-1. It was pure dominance that was displayed by Kerala Blasters FC as they roared into their 8th win of ISL 2022-23. They now are in the 3rd position of the ISL points table in this edition.

One of the best goals of this season came in the 9th minute of the game as Apostolos Giannou found the back of the net with a superb back heel flick. He was assisted by a cross from Dimitrios Diamantakos.

The Tuskers stamped their authority very early in the game but they also received stiff competition from the Red Miners, as Aidy Boothroyd’s men kept making chances to crawl back into the game.

Daniel Chukwu then equalized for Jamshedpur FC and gave tough competition to Kerala Blasters. But a handball from Boris Singh in the 30th minute enabled Kerala Blasters FC to a penalty. Dimitrios Diamantakos did no mistake in the goal from the spot and brought about his 6th goal in the ongoing edition of ISL.

The half-line score read 2-1 in favor of Ivan Vukomanovic’s Kerala Blasters FC and they needed a strong comeback in the 2nd half. But the defense department of the Yellow Army was right on the money as they negated all the threats which were posed by the Jamshedpur FC attackers. Adrian Luna capitalized on the lead which was already present for Kerala Blasters FC in the 65th minute.

This goal was the first of five one-touch passes in this tournament. And naturally, this was one of the best goals which we have seen so far in this season of the ISL. Kerala Blasters FC next faces a stern challenge in the form of an away game against table-toppers Mumbai City FC.

The Islanders are unbeaten in ISL 2022-23 so far and look like an extremely potent and formidable unit. Jamshedpur FC on the other hand lock horns with Chennaiyin FC in their next match of ISL 2022-23.