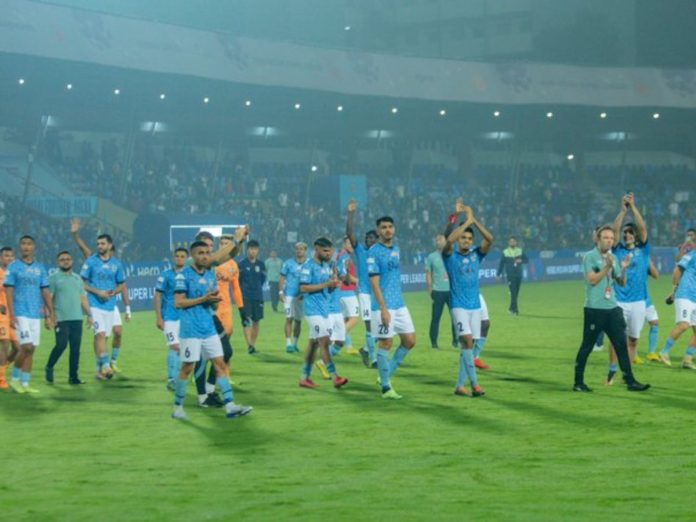 Ahmed Jahouh’s set-piece deflected free-kick got the Islanders the lead in the 5th minute itself. Alberto Annese’s strategy of an all-out attack backfired as NorthEast United FC ended up conceding 3 goals after 15 minutes of the game.

Jorge Pereyra Diaz scored the 9th goal of this ISL 2022-23 season as he looks absolutely unstoppable. Greg Stewart and Vinit Rai scored the other goals for Mumbai City FC as they absolutely stamped their authority in this game.

Pereyra missed a penalty towards the end of the game as Mirshad Michu managed to save NorthEast United FC from further embarrassment. The playoffs are out of reach for Annese’s side and they will be playing to salvage some prestige and to save the team from the blushes.

Hyderabad FC will have a chance of closing in on the gap as they lock horns with East Bengal FC tonight at the Salt Lake Stadium. The defending champions of ISL would be looking to gain 3 points and reduce the gap at the top of the points table to only 4.

Des Buckingham would be extremely elated with his side’s performance as his side has scored 45 goals in 15 matches so far. FC Goa presently holds the record of the most number of goals in a single season during the league matches, when they achieved this feat in the 2019-20 season with 46 goals in their kitty. With 5 games remaining in their league campaign, Mumbai City FC would fashion themselves to breach that mark.

Mumbai next play Jamshedpur FC on 27th January 2023 and NorthEast United FC will be facing a tough opponent in the form of Kerala Blasters FC on 29th January 2023.