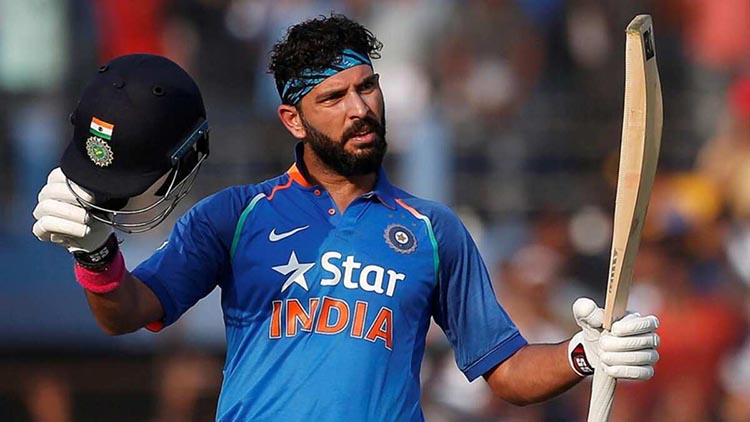 Remember those marvelous 6 back to back sixes that Yuvraj Singh hit off Stuart Broad? Yuvraj Singh was India’s one of the best white-ball all-rounders. During his prime days, many bowling oppositions feared being smashed by him. Yuvraj was one of the key members of the Indian Cricket Team. And he helped it reach heights in many ways.

Many people remember that 6 hit by Mahendra Singh Dhoni off Nuwan Kulasekara. And that sparked off India’s World Cup celebration at Mumbai’s Wankhede Stadium. But many may have forgotten that the major force behind India’s WC campaign. It was Yuvraj Singh. Yes, it was why he was named as the ‘Player of the Tournament.’

More than a year has passed since the Chandigarh Southpaw hung his boot. On that note, let’s take a look at 5 memorable moments involving Indian Cricket’s Prince!

That MSD six in the Final of the ICC Cricket World Cup in 2011 has to be one of the defining moments of Indian Cricket. Dhoni had promoted himself up the order and played a Captain’s knock by remaining Not Out on 91. 97 of Gautam Gambhir had already laid the foundation for India’s victory earlier. Yuvraj did not have much left to do. He was Not Out and saw India’s winning runs. Yes, he had picked 2 wickets earlier. Singh was India’s ace in the WC in many matches. He went on to win 4 ‘Man of the Match’ awards and was also the ‘Man of the Series’. Yuvraj was already battling cancer in the WC. And he displayed a brilliant desire to play for India yet again.

#4 – The highest successful run chase of India in Home Tests

When England toured India in 2008, Indian Cricket saw a new record created. Yes, the Indian Team managed their highest successful run chase at home. England rode on the tons of English Captain Andrew Strauss in both innings. India had to chase 387 to win. India began well with Sehwag scoring a quick 83 off just 68 balls. It gave India the confidence to go for the win and not play for a Tie. India was placed at 224 for 4 with Gambhir also contributing with 66. In came Yuvraj Singh and stitched an important partnership with Sachin Tendulkar. Sachin went on hit an unbeaten century while Singh remained Not Out on 85. It helped India to chase down the stiff target.

Who would have forgotten those 6 sixes that Yuvraj Singh hit in the first T20 World Cup in a game Vs England? He was India’s key player and would always be in the history books for those onslaughts on young Broad. India faced England in a must-win encounter and started well with the 50s from Sehwag and Gambhir. Andrew Flintoff was hammered by Yuvraj for 2 consecutive boundaries. And it was enough for them to exchange in a war of words. This episode engaged Yuvraj Singh. And he went on to assault Broad by hitting him for 36 runs in an over. Singh also scored T20i’s fastest 50 in just 12 balls. India remained alive in the Tournament and won the game by 18 runs. Yuvraj Singh proved to be the difference between both Teams.

The 2002 Nat West Trophy Final is among India’s finest wins ever on foreign soil. And the way Dada took off his shirt to celebrate India’s victory is etched in the memory. India was given a massive target of 326 by England. Nasser Hussain and Marcus Trescothick scored tons for England earlier. India added 106 runs for the 1st wicket in only 87 balls. But India was seen tottering at a total of 146 for 5. And at this crucial juncture, Yuvraj Singh and Mohammad Kaif took on to them to take India through. They went on to add 121 runs for the 6th wicket. And Yuvraj scored 69 runs out of those. But Kaif remained unbeaten till the end on 87. It helped India pocket a famous victory by 2 wickets.

#1 – The blockbuster debut of Yuvraj Singh

As the century turned with the rise of 2000, the Indian Cricket Team was beleaguered. It is because many players were speculated to be under the scandal of match-fixing. At that time, Sourav Ganguly was given the reign of the Team with many new faces. This combination went all the way to ICC Knockouts 2000’s Final. But India was beaten by the Black Caps. But it was also the Tourney that saw the rise of a 20-year old Yuvraj Singh. In his first game that was against Australia, Singh went on to hit an 80-ball 84. It was also studded with 12 boundaries. Yuvraj Singh played a fearless inning. And it was something that Aussies were not prepared for at all. India went on to pocket the match. And it also marked the announcement of the new Super Star of the Indian Cricket – Yuvraj Singh.

Keep following KhelTalk, and we will continue to bring you many more amazing stories on Cricket and beyond!