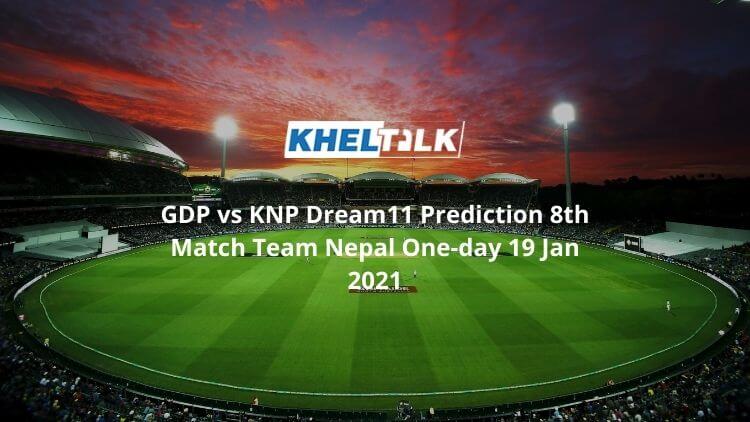 According to GDP vs KNP Dream11 Prediction for Today’s Match Fantasy Cricket, Gandaki Province will take on Karnali Province in the 8th match of the Prime Minister Cup, 2020-21 on Tuesday, 19 January 2021, at the Mulpani Cricket Ground, Kathmandu. Keep reading to find out about the Prime Minister Cup, 2020-21 8th match GDP vs KNP Dream11 team today.

The pitch of Mulpani Cricket Ground offers assistance to the batsmen. However, there will be something for the pacers early in the innings and that session will decide the winner. If the batsmen can survive the same, We can witness the free flow of runs.

We are going to have a decent sunny day. There will be a lot of clouds, making it an excellent climate for a day of cricket. The temperature is expected to be 18-degree Celsius and the humidity to be 62%.

Gandanki Province has a fine mix of experience as well as youngsters. However, the team is finding it difficult to go in with the perfect playing eleven.

Gandanki Province went down to Tribhuwan Army Club in the first match. The team looked down and out while chasing a modest total of 287 runs but the team did have a few positives when it comes to their bowling and with the bat, Sameer Kandel smashed a fifty as well. As the team prepares for a better contest here, we can expect a good knock from Kandel once again.

The team is likely to go ahead with the same playing XI which fielded in the first outing.

Compared to the team GDP, the team KNP are a better squad and can be backed in this contest.

With the mix of good experienced players, the team KNP looks good on papers but their form is still a concern. The team have lost five matches in a row and will be looking to re-write their poor run here for sure.

The team will be going in with the same line-up that went down to the Army Club recently. They will be looking for a fresh start here.

Dinesh Adhikari – Adhikari is one of the players who can be trusted here. Thanks to his all-round ability, he is the must-have pick for the fantasy side.

Bipin Khatri – He will be looking to lead his team from the front here. In the first match, he had two wickets and also had a cameo to his name.

Rabindra Shahi- Shahi looked good for his 30 in the first match. It was unfortunate that he couldn’t convert his cameo to a big score.

Sameer Kandel- He smashed a fifty in his first outing and did well to give his team some hope with the bat. Once again, Kandel will be holding the key in the batting order for the team.

Pun is one of the best all-rounders available in this contest. He is better than what his numbers show here and can be backed to be in the playing eleven.

He has been consistent with the ball and has also contributed well with the bat, making him one of the must-have picks here.

Oli can be the game-changer in this contest. He batted well for his 16 in the first match but couldn’t make it through.

Kumal will be opening the batting for the team and we can expect a lot of fireworks from him. He is capable of playing the long innings and this could be his day.

Khatri will be the opening the bowling as well as the batting for the team and in the first match, he ended up picking up a wicket.

He bowled well in the first match and will be looking to continue the same here as well. He might be introduced a bit earlier in this contest.

Here is the Dream 11 Team prediction for GDP vs KNP. We are going with players who are currently in good form and can win the match with ease.

Who Will Win Today Between GDP vs KNP Dream11 Prediction, 8th match?

According to Kheltalk’s astrology GDP vs KNP Dream11 match Prediction, GDP will win the match.

According to Kheltalk’s GDP vs KNP Dream11 toss prediction, GDP will win the toss and ask KNP to bat first.