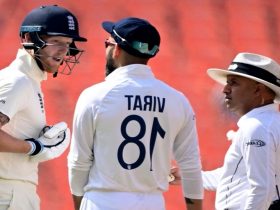 India is currently playing 4th Test against England at Narendra Modi Stadium in Ahmedabad. On Day-1, Indian skipper Virat Kohli was involved in a heated exchange with England all-rounder Ben Stokes. The reason was unknown to everyone. But, Mohammed Siraj has finally raised the curtains from the same. In virtual conference, he revealed that the left-handed all-rounder abused him and later Virat Kohli warned him for not using the cheap tricks.

Siraj replaced Jasprit Bumrah, who pulled out of the final Test due to some personal reasons. The pacer well justified his selection by bowling impressively well. He never allowed the English batsmen to score runs easily. In the 13th over Siraj bowled a ferocious bouncer to Ben Stokes. As per Siraj, the England all-rounder abused him at the end of that particular over.

The 26-year-old walked to Indian skipper Virat Kohli and informed him about what Ben Stokes said to him. In the end, Kohli was seen having a discussion with Stokes for not doing such things on the cricket field. The discussion looked like turning into a heated altercation and at the right time, on-field umpire Virender Sharma intervened between the two players.

During the virtual conference, Siraj also discussed the pitch’s behavior on Day-1. He said that the track looks well settled for the batsmen. As per him, the plan was to be a bit patient while bowling

“The wicket is good to bat on. The plan was to be patient and wait for the ball that might come in. Virat told me, since we only had two quicks, rotation was important. After bowling two overs, Virat asked me change my ends, since I was getting more movement there. Ben Stokes gave me gali (abused me), so I told Virat bhai about that. Virat bhai handled it thereafter,” said Mohammed Siraj.

Coming onto the match, India looked in prime position as they dismissed visitors once again at a low score. England scored only 222 runs in the 1st innings. On the other hand, India also got off to a poor start as they lost the important wicket of Shubhman Gill quite early and the hosts finished Day-1 with a score of 24 runs for a loss of 1 wicket.