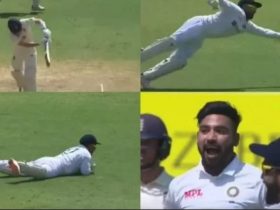 Ishant Sharma, the Indian pacer got off to an amazing start in his 100th Test match. India is currently playing against England at the newly re-innovated Motera stadium now known as Narendra Modi stadium. The right-arm pacer dismissed England opener, Dominic Sibley, for a duck.

England won the toss and elected to bat first in the 3rd game. And, the decision didn’t go down well in favor of the visitors. They lost their in-form opener, Sibley, for a duck. In Chennai, the England side struggles to face the spinners as they failed to play well against the red-cherry. Today, they got a golden opportunity in Motera to come out and post a mammoth total on Day-1 in the historic Day-Night Test.

Golden Start For Ishant Sharma In His 100th Test Match

Also, English skipper Joe Root also thought the same and this is the reason why he opted to bat first. The track also looked pretty much solid that was expected to go in favor of the batters. However, that was not the case.

Indian pacers came with the ball all guns blazing and didn’t allow England batsmen to score a single run in the first couple of overs. Dominic Sibley got off to a slow start and he was looking to get settled on the wicket. But, before he could open the account in the game, he was dismissed by Ishant Sharma on a peach of a delivery.

The instance happened in the third over of the game with the ball in the hands of Ishant Sharma. The Indian pacer bowled a short of a length delivery. The England batsman went for defense but the ball got an extra bounce. Meanwhile, Sibley failed to cut the bounce and ended up giving an easy catch to Rohit Sharma, who was standing on the second slip.

Coming onto the game, currently, Indian spinners have once again paved problems in England’s way. Axar Patel, the Indian all-rounder looks simply unplayable and he took the wicket of Jonny Bairstow on the very first delivery of his home game.