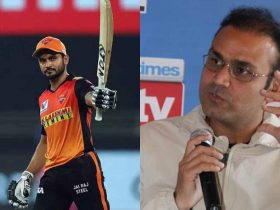 Indian Premier League 2021 is all set to begin from April 9, 2021, at MA Chidambaram Stadium in Chennai. The exciting tournament will get kicked-off with the match between Mumbai Indians and Royal Challengers Bangalore. And, the former has suffered a big blow as they will be without their premium spinner Adam Zampa in their campaign opener.

RCB is one of the most followed franchises in the Indian Premier League irrespective of the fact that they have not won a single-season till now. And, the reason behind their big fanbase is their star-studded line-up that comprises AB de Villiers, Virat Kohli, and Yuzvendra Chahal. They are currently the biggest stars in international cricket.

Adam Zampa Is All Set To Start New Innings Of His Life, Will Miss RCB’s Campaign Opener

In the IPL 2021 auction, they rope some more players like Glenn Maxwell and others that will add a cherry to their dominating squad. In the previous edition, they managed to qualify for the playoffs. But, Royal Challengers Bangalore failed in qualifying for the finals. This season they will enter into the tournament with fresh hopes of winning their maiden title. But before that they have suffered a big blow as their leg-spinner Adam Zampa will not be available for the franchise in their campaign opener.

Mike Hesson, RCB’s director of cricket informed fans and the cricketing fraternity about the same. He said that RCB will not have all their overseas players available for the tournament opener. He revealed that Adam Zampa is set to get married and start new innings of his life. So, he will not be able to play RCB’s campaign opener. As per the Hesson, it is going to be a big occasion for the leggie and the franchise is well aware of the same.

“We won’t have our full contingent of overseas players available for the first game,” Hesson said. “Adam Zampa is getting married. It’s an important time for him and it’s something that as a franchise we are aware of and we respect and we hope he has a great time. So when he joins us, once again he is going to be fresh and make a massive contribution to the rest of the tournament.”

The former Kiwi selector said that the players will arrive in India based on their international engagements. He opined that players will be getting a no-objection certificate from the board and this plays a key role. Also, everyone will have to go through a seven-day quarantine before taking the field for the team in the Indian Premier League

“We have got players arriving all the way through till 1st of April, which is where we get the NOCs for some of the overseas players, particularly those who are playing,” Hesson said.