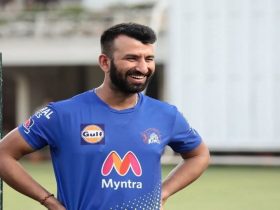 Kolkata Knight Riders lost their 2nd game against Mumbai Indians by 10 runs. And, the fans bashed KKR for their poor batting during their chase of 152 runs in stipulated 20 overs. KKR that looked in a comfortable position to win the game at one point suddenly witnessed one of the horrific batting collapses in IPL history. Post-match, Shahrukh Khan apologized to fans for the poor performance of the team. Even, former cricketers like Brian Lara and Virender Sehwag have also taken a strong dig at the performance of Eoin Morgan & Co.

Kolkata Knight Riders won the toss and elected to field first. They dominated for the most part of the game on the back of their bowlers like Pat Cummins and Andre Russell. The latter even took his first five-wicket haul in IPL. The commendable effort from the bowlers restricted MI at a low score of 52 runs. And, it looked like an easy task for the jam-packed batting line-up of KKR.

Virender Sehwag Is Unimpressed With KKR Poor Show Against MI

But that was not the case. KKR openers stitched a decent partnership of 72 runs. Nitish Rana smashed his 2nd consecutive fifty of the tournament and Shubman Gill scored well 33 runs. KKR had taken a firm grip on the match. But a sudden collapse forced Knight Riders in facing their maiden defeat of IPL 2021.

Brian Lara took a dig at how carelessly KKR performed against MI. Now, Virender Sehwag also joined the bandwagon. He said that Eoin Morgan gave assurance that KKR will play positive cricket. But, that never looked in the game against Mumbai Indians. As per him, Andre Russell and Dinesh Karthik planned to take the game till the end and win it. However, they failed in doing so.

“Eoin Morgan had given a statement that they will play that way (with positive intent) after the first game but it didn’t look like that when Andre Russell and Dinesh Karthik came in to bat. The way Russell and Karthik batted, it felt like they planned to take the game till the end and win it. But that didn’t happen. The batters who came before them – be it Shakib Al Hasan, Eoin Morgan, Shubman Gill, or Nitish Rana – all of them played with positive intent,” Sehwag said on Cricbuzz.