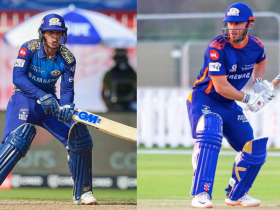 Kolkata Knight Riders got off to a great start in IPL 2021. They defeated SRH in the opening game. Afterward, they have suffered two defeats in a row and somewhere their decisions have cost them the game. In the first three games, West Indies star all-rounder Sunil Narine didn’t play for the former IPL champions. But, now, Brendon McCullum has hinted at his comeback in the match against Mumbai Indians.

KKR suffered a humiliating defeat by 38 runs against RCB. At one point, the former was in the match as they dismissed star batsman Virat Kohli and Rajat Patidar in the first couple of overs. But, then came the ‘Big Show’ Glenn Maxwell. He played a blissfully knock of 78 runs against KKR. Later on, AB de Villiers also joined the party with the bat. He smirked 76 runs off 34 balls that helped RCB in posting a mammoth total of 204 runs for a loss of 4 wickets. Coming to chase, KKR never looked near to the chase and lost the game.

During the game, several questions were being raised by the commentators on why KKR didn’t use Varun Chakravarthy against Maxwell in the beginning. Now, Brendon McCullum has clearly said that they wanted him to bowl against AB de Villiers.

The KKR coach has also revealed the situation around Sunil Narine. He asserted that the West Indies all-rounder was not fit in the first couple of games. Although, he was fit to play against RCB. But, Shakib Al Hasan’s form gave him an edge. However, now it is expected that Narine will manage to play his first game of IPL 2021 against MI.

“Sunil Narine stood on the rope before our first game which means he has had an injury where he was not 100 percent fit. He certainly comes into our calculations, he was touch and go for this game against RCB but we opted for Shakib who has been good for us and he gives us an extra bit of batting.

“After three games, the guys have played well, we have not got the results, we probably will need some fresh legs for slightly different wickets in Mumbai. We probably expect to make one or two changes in our next game, but overall I think, we have shown we have a good chance in this tournament if we tidy up,” McCullum said while speaking in the post-match conference.