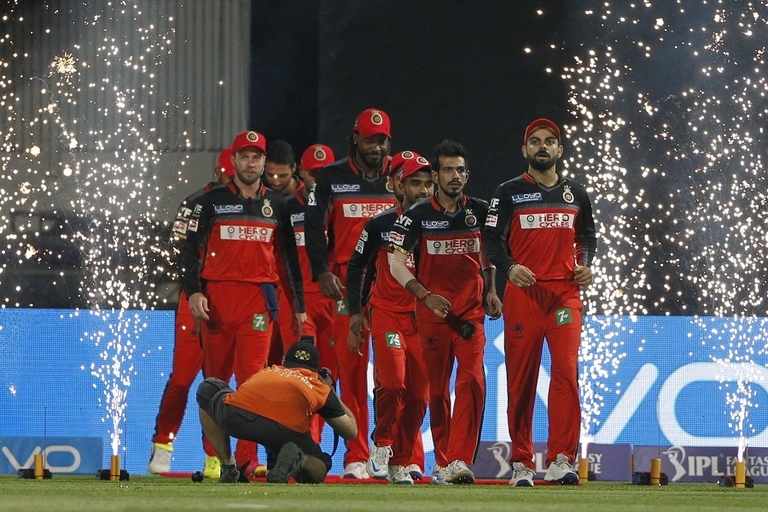 It adds more pressure to these stalwarts to score the bulk of runs, as the surrounded players are not renowned in the lineup.

The auction of 2021 makes RCB more favorites now, as the new inclusion of Glenn Maxwell strengthens the batting lineup. The burden will now shift to Maxwell from the two stalwarts, as whenever they walk out people expect big from them. The Maxwell show will seek the attention of the fans, as he is the big show and the attention will certainly divert.

The auction of 2021 makes RCB more favorites now, as the new inclusion of Glenn Maxwell strengthens the batting lineup. The burden will now shift to Maxwell, as he is renowned for the big show.

If AB de Villiers stands behind the stumps again in this season, then it will certainly provide more stability to the lineup.

Here is the look of the RCB Strongest Playing 11:-

The above playing 11 will be more suited to Royal challengers Banglore, as the auction of 2021 gives more cushion and flexibility to the lineup.

Virat Kohli should open the batting for Royal challengers with impressive Padikkal. The inclusion of Glenn Maxwell will give more freedom for Virat to play the natural game with instinct, as the burden will now shift to down the order.

AB de Villiers at No.3, Glenn Maxwell at No.4 will be ideal for Royal challengers, as the duo of these two lads can be a nightmare for the opposition in terms of reputation and experience in T-20 cricket.

The number five slot is for the hero of Syed Mushtaq Ali trophy, as Azharuddeen can hit some biggie lower down the order. The inclusion of Azharuddeen will give Virat more flexibility, as he has the Indian power to catch up in the end.

The number six slot should be ideal for Australia’s veteran rounder Danial Christian, as he has ample experience in T-20 cricket while playing all around the globe. He has got range hitting in the slog overs, and he can turn out to be a nightmare for the bowlers considering his current T-20 form.

The number seven of Royal challengers Banglore should be the millionaire from New Zealand, as he has got big bucks in the recently concluded auction. The New Zealand all-arounder has the ability with the bat to unleash at the back end of the inning. Virat Kohli will be delighted to have such finishers at the closing overs.

The last four players should be easy to pick out, as they are going to play most of the games in the upcoming season courtesy of some brilliant performances. The last four for RCB will be Washington Sundar, Yuzi Chahal, Mohammad Siraj, and Navdeep Saini.

Kyle Jamieson will complete the full quota of five bowlers, as only one overseas bowler in the playing 11 shows the core of the bowling lineup.  The sixth and seventh bowling options for Virat Kohli will be Danial Christian and Glenn Maxwell, as these two are more suited in the Indian condition.

Every season Royal challengers struggled with the bowling lineup, but the upcoming season will change the perception and team’s combination of the team. The Royal challengers will be delighted with the batting options, as Sundar slated to bat at No.8 gives more flexibility to the strong batting lineup for RCB.

Royal challengers Banglore shifted their focus to strengthen the Indian core in the lineup. The upcoming season will see some of the raw talents who will warm up the bench.

The biggest reason for the favorites tag going into the tournament is that Royal challengers Banglore have done a terrific job at the auction table.

The International Indian bowlers in the lineup and overseas all-rounders can sort out the trouble for RCB. Virat Kohli will be comfortable in defending the totals on the back of quality bowers.

The RCB side now has the strongest playing 11, as the weak links are wipeout due to some brilliant paperwork at the auction table.

Kane Richardson, Josh Philippe, and Daniel Sams will be the cushion for any injury.

RCB has got the strongest playing 11 in the upcoming season, as they sort out the concern areas. The pressure of scoring runs will now diversify in the batting order, as Glenn Maxwell and Danial Christian will play a vital role for Royal challenger Banglore in closing out the inning with some outrageous hitting.

The beauty of RCB playing 11 is that they got the arsenal in both the department who can win you a game in any situation.

The two stalwarts Virat and De Villiers are renowned for unbelievable work on the field, whereas the two Australians Glenn Maxwell and Danial Christian can also win you a game single-handedly on their day.

Mohammad Siraj, Washington Sundar is in terrific form at the international level. These two Indian rising stars will play a massive role in defending the totals for RCB. The off-spinner Washington Sundar was outstanding in the powerplay while playing in the previous season. The pacer Mohammad Siraj has been in remarkable form with the ball, as he has the habit of taking wickets at the top and can contain runs at the back end of the inning.

Mike Hesson has done a great job on the Auction table, as he knows the ability of the individual. He chooses wisely as per the team’s combination, and he has done well to an extent.

“Often Maxwell has been used in a finisher role, he is a multi-skilled player and he can bowl off-spin as well. It depends on what the team wants, we all look at how to bring the best out of him. We were after the X factor player and we got that in form of Maxwell,” Hesson said during a media interaction in Chennai.