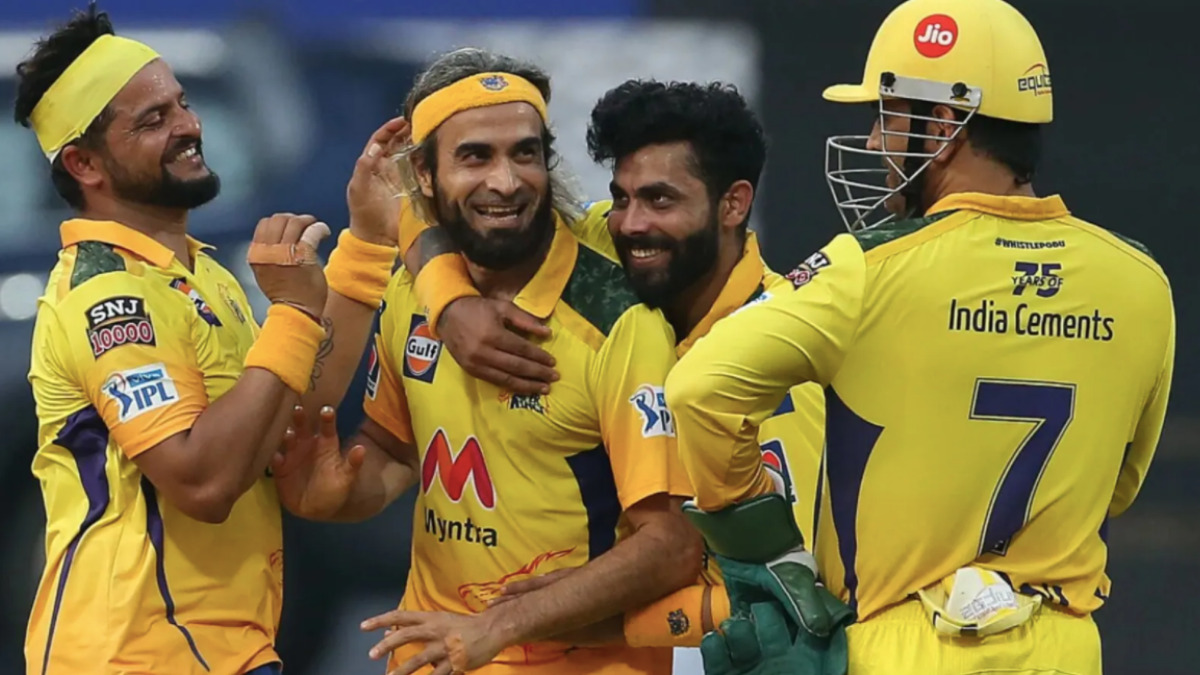 Imran Tahir, the veteran leg spinner from South Africa got his maiden game of the season when CSK took the field against RCB. The senior-most spinner was at his best with the ball. Meanwhile, he also impressed Ravindra Jadeja with his on-ground fielding. The latter was so impressed that he quizzed Proteas spinner on what motivates him to be so aggressive at the age of 43.

Imran Tahir is one of the most important bowlers for the Chennai Super Kings. MS Dhoni uses him in crucial games in order to churn out success for the franchise. In the most recent CSK game, he was picked in the playing 11. Tahir took two wickets dismissing Harshal Patel and Navdeep Saini. Also, he showed his class in fielding as he jolted a rocket throw in order to send Kyle Jamieson back to the pavilion.

Post-match, Ravindra Jadeja quizzed Imran Tahir on what keeps latter motivated to continue playing in such a fashion. To which veteran spinner said that he also tries hard in the nets in order to stay fit. He added that in cricket if a player is in the team then he cannot hide from fielding and he wants to contribute in the best possible way whether be it fielding, bowling or batting

“Main bhi chhupke fielding karta hoon jab humare net hote hain! (I secretly practice my fielding during the nets). I know this is professional cricket, no one can hide on the field. You are in our team, you attack the ball like lightning. I also want to be electric in the field, you inspire youngsters and me as well. Looking at you guys, I try to do my best whenever I am playing,” Tahir revealed in a video uploaded on IPL’s official Twitter handle.

Earlier, Ravindra Jadeja had said that he was very tired till the last over and told MS Dhoni that he will go for big strokes. The CSK all-rounder added that he was lucky enough to connect five out of six times against Harshal Patel in the match against RCB. Ravindra Jadeja produced his best performance of his IPL career as he took three wickets and smashed 62 runs off 28 balls.

“I was very tired before the last over, because I had run a lot of twos before it. When Mahi bhai (MS Dhoni) came in the last over, I told him that I will swing my bat at everything because I was very tired and it was really humid. I planned to swing as hard as I can and get the connection. I didn’t expect to connect five times! I am very happy because it helped us win.”