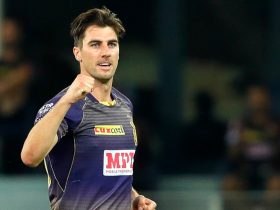 I don’t Think Ending the IPL is the answer to the situation: Pat Cummins

KKR head coach Brendon McCullum question the performance of their top-order that has let down team management in the ongoing IPL 2021. KKR suffered their 5th defeat of the tournament and by a margin of 7 wickets. Also, the former Kiwi cricketer hints at making changes going ahead in the upcoming games.

Kolkata Knight Riders have suffered a lot due to the poor form of their top-order in IPL 2021. Nitish Rana, Shubman Gill have failed as openers of the team. Meanwhile, Rahul Tripathi lacks the consistency to perform for the team. In the match against Delhi Capitals, the top three managed 77 runs off 67 balls for KKR at an average of around 7 runs per over.

Later on, Andre Russell took the charge against DC bowlers and smashed 45 runs off 27 balls. But, it was never enough for the KKR. The former two-time IPL champions scored 154 runs in stipulated 20 overs. The score never looked defendable on a batting-friendly track of Narendra Modi Stadium.

Post-match, KKR Head Coach Brendon McCullum looked unimpressed with the way his side lost the game. He was disappointed and said that he can’t understand why players are finding difficulty in acquiring an aggressive approach during the games in order to turn the tide in favor of the team.

“It’s very, very disappointing. As a player, you ask to be given freedom and confidence and loyalty when it comes to selection, to go out there and take the game on and try and be aggressive… and to try and make things happen for your team.

He added that the captain has also asked the players to go out and express to the fullest. As per him, the team is not getting what they want from the players and they might opt for some changes in the playing 11 in the upcoming games.

“That’s the style of play which both myself and the captain (Eoin Morgan) have asked of our players. But unfortunately, we’re not quite getting that. We’re certainly not getting it in the abundance that we need,” McCullum said after the game.