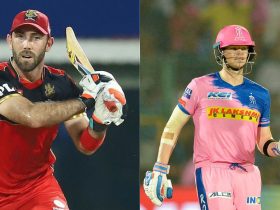 Cricket was back in India. After a successful IPL venture in the UAE, a hurried Mini IPL Function was held at Chennai, and all the franchisees chopped and added players to give their team a boost. The surprise was, of course, Chris Morris, who became the most expensive player to have been bought in an auction.

BCCI had been successful too, is hosting the English Cricket team, which provided a lot of excitement to the Indians as they came out triumphant.

Curiously, many of the matches had no spectators. The Covid -19 situation, it appeared, had altogether disappeared! To celebrate this, stadiums were allowed to sell 50 percent of their capacity, and the players were provided excellent protection inside the Bio- bubble.

Bravado followed as the newly inaugurated stadium fills up to almost 80 percent. Amid this, The Gujarat newspapers published news of a massive surge in Covid – 19, and the BCCI immediately shut the crowd out for the remaining matches.

Trouble started for the BCCI and had already scheduled six venues for the IPL to be played in.

It did not stop there. The BCCI decided to continue the same policy during the IPL but shut out the crowds again, fearing the spread of the virus.

Hardly a hundred watched the matches in the ground, and they were primarily the franchise owners and relatives.

BCCI never contemplated that the virus was on the rise in India, and they dismissed the option of holding the tournament in the UAE. And the 14th Edition of the IPL started with a bang in Chennai on 9th April 2021.

With the virus issue growing day by day, the IPL continued on its way, with the matches proving to be more exciting. The players were well protected till that day. News broke out that two KKR players had contracted it, and the game on 3rd May had to be postponed. On 4th May, two CSK personnel also contracted it, and the BCCI had to take a much firmer decision. They announced that the IPL was postponed indefinitely. There were no fresh dates announced, although a possibility of shifting to other venues was being considered. Even that idea was dropped almost immediately.

The IPL is one of the top cash tournaments in the world. As of the date of suspension, only 29 of the 60 matches scheduled had been played.

Star Sports, the official broadcaster of the IPL, pays the BCCI 3270 Crores a year (five-year contract). In other words, they would pay 54.5 Crores per match. Since 31 games were not to be staged, BCCI lost close to 1690 Crores from them.

The tournament’s title sponsor ‘ VIVO’ dole out Rs.440 Crores every year. Converted into ‘ per match ‘ sponsorship, it is 7.34 Crores. Translated into non-payment for 31 matches, it is 228 Crores.

The associate sponsors like Dream 11, Un- Academy, Tata Motors, Upstox pay the BCCI 120 Crores each season. The loss would be more than 310 Crores due to these companies edging out.

On the whole, a minimum of 2000 Crores would be lost by BCCI. There are a few more subsidiaries that contribute, but they are ignored here.

Was It Ego? A look into the near future!

If BCCI had decided to play the rest of the tournament in UAE, all these would be gained back. Of course, the payment to UAE would be a new expense, but it is little compared to the massive upfront income lost.

The Indian team has a full calendar year from June 2021. If the Covid – 19 situations does not ease before October, the chances of the T-20 World Cup would be shifted elsewhere.

The losses are not BCCI’s alone. The franchise owners, the Indian Government, which collects taxes, are all hurt.

Only the future would tell us whether BCCI can complete this tournament this year. As of now, it looks impossible.

If the BCCI had been careful in estimating the potential financial disaster letting go of their ego of not conducting the IPL amidst a Pandemic, and shifted to UAE, Fans, Franchises, Players, Indian Government have benefitted greatly.

It is spilled milk, and it’s too late. Too late unless BCCI pulls off the 31 pending matches in UAE, which has always welcomed the BCCI and its innovative ways of promoting the great game called ‘Cricket’!

You might get to see the best of MS Dhoni in the IPL 2021 remainder. Here is why