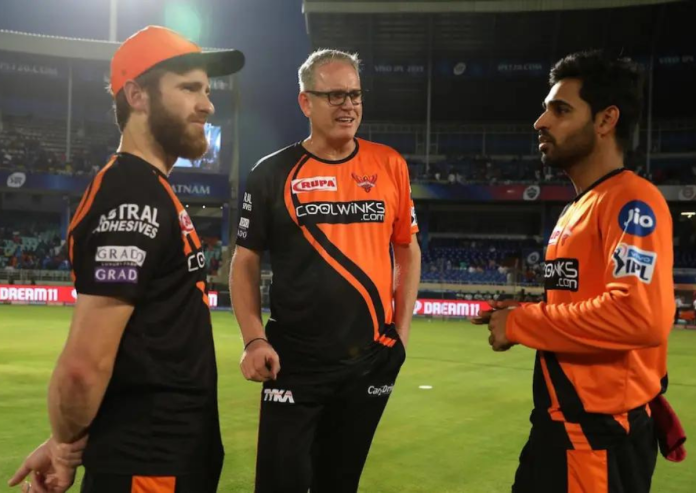 One of the most consistent teams in IPL, Sunrisers Hyderabad had a season to forget last year. For the first time in their IPL history, SRH succumbed to the bottom of the points table. Out of the 14 games played, they could only win only 3. As a result of that dull performance, SRH released some enduring campaigners such as David Warner, Jonny Bairstow, Rashid Khan, and Jason Holder.

They stuck to Kane Williamson who would be leading as captain and also retained the services of Abdul Samad and Umran Malik. In addition to that, they broke their bank to get Nicholas Pooran for a huge sum of INR 10.75 crores. Besides, they spent heavily on the likes of Washington Sundar (Rs 8.75 crore), Rahul Tripathi (Rs 8.5 crore), Romario Shepherd (Rs 7.75 crore), and Abhishek Sharma (Rs 6.5 crore).

Sean Abbott, Glen Phillips, Aiden Markram, Marco Jansen are some other overseas names freshly added to the squad. Nicholas Pooran will daunt the wicketkeeping gloves and will add firepower to the squad. Coming to the bowlers, Bhuvaneshwar Kumar, Shreyas Gopal, Kartik Tyagi, and T. Natarajan form the perfect bowling attack.

They will face Rajasthan Royals in their first match on March 29. Ahead of the clash, let’s have a look at the strongest playing XI of KKR which can make it to the field.

Sunrisers have four probable openers in the form of Rahul Tripathi, Abhishek Sharma, Aiden Markram, and Captain Kane Williamson. But most likely the first two listed above should form the opening duo. Rahul Tripathi already did wonders playing some brilliant knocks for KKR helping them to the finals in the last edition. He would be looking to have a similar impact with the bat with his new franchise. Meanwhile, Abhishek Sharma, who also opens for Punjab in domestic cricket would support him on the other hand. The talented youngster is an attacking batter and can prove to be a valuable asset in the powerplay overs.

In the middle order, SRH will likely see Kane Williamson at No.3 and followed by the dynamic pair of Aiden Markram and Nicholas Pooran. Williamson shall lead his team from the front and can adapt his game quite well. He can play the role of an anchor with other attacking batters playing beside him. Nicholas Pooran provides a lot of confidence with his recent form in the shorter format. Similarly, Aiden Markham has a lot of potential and the team will have similar expectations from him.

Abdul Samad was the only Indian player to be retained by the franchise. He alongside Romario Shephard and Washington Sundar provide good firepower. Shepherd though has been a regular in his domestic T20 league back in the Caribbean and holds the reputation of being a nippy fast bowler and a hard-hitter lower down the order.

Coming to their bowling, SRH would be relying on the Indian contingent as we had also seen in their previous years. Bhuvneshwar Kumar shall lead the bowling attack alongside T Natarajan with leggie Shreyas Gopal taking care of the spin-bowling. Gopal is definitely a better option over Kartik Tyagi for spin-friendly pitches. While Bhuvi shall focus on powerplay and death overs T Natarajan shall see his value more for middle overs and death overs.