The BCCI and the UAE government have also allowed the crowds to participate in the tournament from this period. The only condition for the crowd to watch live matches is to get the COVID vaccination done, and then 50 percent of the audiences can watch the cash-rich league tournament live.

But after the two good news, there will be bad news that the overseas players will not participate in the remainder of the tournament. The cricket boards of the overseas countries might not give the NOC to their players, and that would be the biggest blow for all the franchises of the eight IPL teams.

The overseas players will be busy with their international schedule, which is why the players from England, Bangladesh, and New Zealand will not participate. At the same time, there is still no clarity on the players from Sri Lanka, Australia, and South Africa. The absence of overseas players is a huge blow because many IPL teams depend on foreign stars because they give a perfect balance.

CSK – Chennai Super Kings is a team that also depends highly on their overseas players. The Yellow Army did well in the first half of the IPL 2021 season when it was played in the country. The CSK members are quite familiar with India’s conditions that may be why they did well here.

But now that the tournament will shift to the United Arab Emirates, the CSK team and the management will have a lot of thinking to do because it was the United Arab Emirates where the Chennai Team performed badly in the last IPL 2020. As a result, Dhoni and his men couldn’t even qualify for the playoff stage, which was also the first time in the IPL history.

The spin bowling all-rounder from England was at his best during the first half of the Indian Premier League 2021 season. Ali was promoted to the number three spot in the first half of the tournament, and he played some cameo knocks, which helped the CSK team to get a good total on the board. Ali also picked up crucial wickets with the ball, and he was a constant help to another spin bowling all-rounder of his team Ravindra Jadeja.

Moeen’s addition and promotion were the difference for CSK this year after being disappointed in the IPL 2020 season. Moeen scored 206 runs in the first six games which he played. Earlier, Suresh Raina was the preferred number three batter for the Yellow Army. But Ali took that position and made it his own. He also bagged five wickets with the ball. Now CSK will be without the services of Moeen Ali in the UAE leg, which might hurt them again. Ali would have been lethal on the slow tracks of the United Arab Emirates, and his power-hitting also would have been vital, and that would have also lifted the team.

The Kiwi spinner also bats well lower down the order. Even though he didn’t get a game in the first half of the IPL 2021 season, Santner is still like gold for the Yellow Army. The Kiwi left-arm spin bowler has been sidelined for a long time, and overall, Mitch has played only six matches for the Chennai Super Kings team. But he is an impactful player for New Zealand and Chennai Super Kings in any format he plays.

Santner is the best player in the current International circuit, and he is that three-dimension player who gives his more than a hundred percent on the field. Santner is like Jadeja, who is an athletic fielder and the most economical spin bowler in the shortest format. CSK will miss him when the cash-rich league tournament starts in the UAE. Santner can be a useful option and perfect backup spinner for any team in this world, and he is very few of them who can constantly repeat his success in all three formats of the game.

The fast bowling all-rounder from the team England has been a main stray in the Chennai Super Kings lineup. Sam Curran has been a wonderful buy for his yellow franchise, and he has given many impactful performances since he has made his debut for CSK. Curran has been bowling with the new ball for CSK, and he has picked up nine wickets in just seven games in the first half of the IPL 2021 season. The England all-rounder has finished with the highest wickets for CSK in the first half of the tournament.

Sam couldn’t get more opportunities with the bat in hand. But a player like him can bat anywhere and do an impactful job. Sam Curran also opened the innings with Faf Du Plessis in the last year’s edition, and he gave the start which CSK needed despite the wickets continued to tumble at the other end. CSK will have a double blow if Curran does not play the remaining 31 matches of the IPL 2021 season. He is a quality all-rounder and a middle-order batsman who could add quickfire runs for the team. England will be busy with their International calendar. That’s is why players like Moeen and Sam won’t be part of the second half of the IPL 2021 season.

The Aussies still need to clarify their participation in the remainder of this cash-rich league tournament. In the IPL 2021 season, Behrendroff was the replacement of Josh Hazlewood, who decided to quit the IPL before it was even started. Behrendroff made his IPL debut in 2019 for the yellow franchise. He has picked up fives in five matches till now.

Even though he wasn’t considered in the playing XI, Jason is a good left-arm seam bowler who can make good use of the conditions in the UAE part. Jason could have been the backup for the likes of Ngidi, Bravo, or Curran. Now the CSK will have the Indian pace core and Dwayne Bravo on their side as the lead pace bowlers if Jason Behrendroff does play the last 31 matches of this tournament. 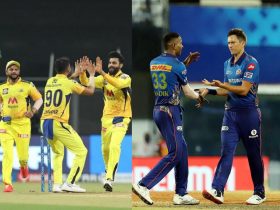