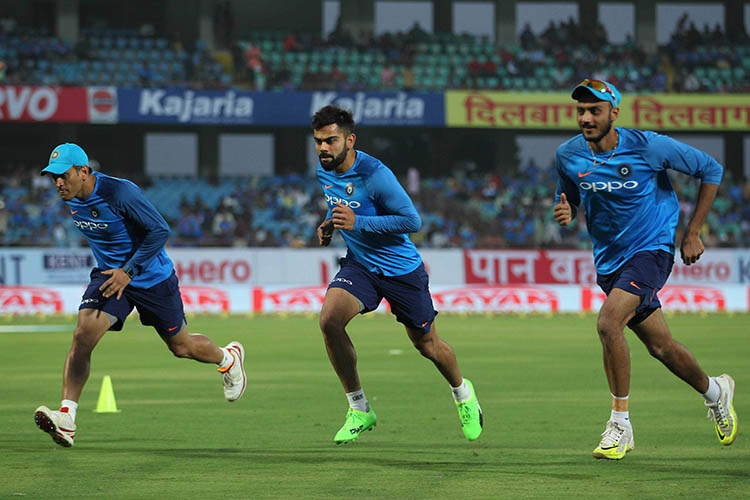 What is YoYo fitness test?

Indian cricketers have to undergo rigorous fitness evaluations to remain in playing 11 at all times. In the past, a beep test was followed for their running aerobic fitness routine. YoYo Test is another form of this beep test for cricketers. Yo-yo testing has become mandatory for fitness evaluation which was not the case with the beep test. One of the examples is of Ambati Rayudu, who was left out of the one-day tournament against the English team, back in July. This test checks the endurance and the pace of the player, thus helping in evaluating how he might fare in a real-game that requires agility and speed.

The routine consists of sprinting between 2 cones that are placed 20 meters apart. The player has to sprint to and fro between the markers. However, the sprint starts with a beep – an indication for the player to start sprinting. By the time the next beep comes in, the sprinter will have to reach the marker on the other end. This cycle continues where players have to sprint between the markers, but must reach the other end of the marker by the time the next beep comes in.

One trip equals covering the distance between one end to the other. As the test continues, the frequency of the beep increases, thus forcing players to complete their trips with greater agility. The time duration between beeps decreases over time. This requires players to shift from a fast=paced jog, to complete the sprint by the end of the test. The score is evaluated as the point when a player misses 2 beeps and is unable to complete 2 trips consecutively. In the previous example, Ambati Rayudu failed to reach the benchmark of 16.1.

The mastermind behind the YoYo Test

Dr Jens Bangsbo, a Danish origin sports-scientist and football coach, had developed this routine back in the 90s. He wanted his players to undergo this routine, that was included along with their long-distance runs as well. Over time, many other sports started adapting this fitness routine in their regime as well. Pro-footballers have a set-benchmark of 21 points.

Shankar Basu, the strength and conditioning coach for the Indian cricket team, initiated this regime ahead of India’s tour against Sri Lanka, back in 2017.

The relevance of the YoYo Test

The Indian cricket team has to undergo a fitness regime that compensates for the pace, agility and endurance that is required in the different formats of the sport. It is an irrefutable part of the fitness routine that also helps players to cope up with the volume of matches that players have to endure in these times.

What happens in the YoYo Test?

Jens Bangsbo, Former Danish footballer and Juventus’s assistant coach, had conceptualized this test. Some reports indicate that the former coach of the Indian national team, Anil Kumble, was responsible to introduce this fitness test for the team. Here is some more information regarding the test:

2. BCCI and the boards for Australian and English cricket teams, among many others, have mandated this routine for their national teams as well.

3. The test is adapted for beginners as well as for the advanced players. The advanced routine consists of players having to sprint between 2 cones placed 20 m apart. Players sprint between the two cones and turns as the beep goes off. The frequency of the beep increases every minute. If a player fails to reach the other end in time, he or she has to compensate for it within the next 2 beeps.

4. The test comes to an end as soon as the player fails to compensate consecutively within 3 beeps. The results are recorded and analyzed on custom software.

5. The benchmark might differ between sports as well. In football, the average benchmark is higher since players require greater agility and speed in this sport.

6. The benchmark set by BCCI is 19.5. Yuvraj Singh was reported to score way below this average (at 16). Virat Kohli scored a 19, while Manish Pandey scored 19.2, both acing the test as per to claims.

Yo-yo test has become an irrefutable part of the fitness regime within the Indian cricket team. The management made this test mandatory for players’ selection, post the West Indies tour in 2017. This strict application for the selections led players to work even harder on their fitness.

Young athletes have been training for this routine. However, experienced batsmen such as Yuvraj Singh and Suresh Raina haven’t been able to cope up with the average benchmark. The surprise comes from Virat Kohli who has aced the fitness test. With a score of 19, Virat Kohli sure seems to have one of the best fitness profiles in the team. However, some players are even better at it, than Kohli.

Top three players who have a better score than Virat Kohli:

Hailing from Karnataka, Karun gained his repute when he scored three centuries against the English team in Chennai, back in 2016. This is a milestone that is matched along with Virender Sehwag’s triple centuries that had been scored twice in his career.

Post the English tour back in 2018, Karun worked along with his fitness coach to aim a better score at this test. While his yoyo test scored was not made official, he is likely to be fit as well. There is no official record to claim his score, but it is obvious that he is likely to be fit.

“I have been spending a lot of time with (Shankar) Basu Sir, our trainer, and Sanjay Bangar sir as well, our batting coach. Obviously a lot of throwdowns and a lot of net sessions. But mainly I have been spending time with Basu Sir. According to him, I am the fittest person in the team right now. I am very proud of that and I just want to keep improving on that,” he said.

Manish Pandey is known for his acrobatic stunts that he pulls out as one of the best fielders in the sport today. He is also an exceptionally good player who plays in the middle-order. His blinders and ability to save runs for his team speaks a great deal about his superior fitness as well.

He has had issues with his batting consistency. But what remains to be irrefutable, is his fitness level who has beaten the Indian captain Virat Kohli at the test, as reported by Times of India. The report claims that Manish has a score of 19.2. It’s promising to see that his fitness level and his performance in domestic cricket might help him get in the Indian team soon.

Dagar, who hails from Delhi but plays for the Himachal Pradesh team in domestic cricket, is another uprising star. He is the nephew of the former opening batsman, Virender Sehwag. His economical off-spin and his performance in the lower middle-order has been appreciated by many.

Dagar beats Kohli in the yoyo test with a score of 19.3. He made this claim on social media, two years back. His performance was first noticed in the U-19 World Cup tournament back in 2016 where he proved to be one of the crucial players for the Indian team. His score during the tournament was 11 wickets taken in 4 matches. His average was 9.36 along with an economy of 2.88. Although he was taken by the Kings XI Punjab team back in 2018, unfortunately, he couldn’t play during the tournament.