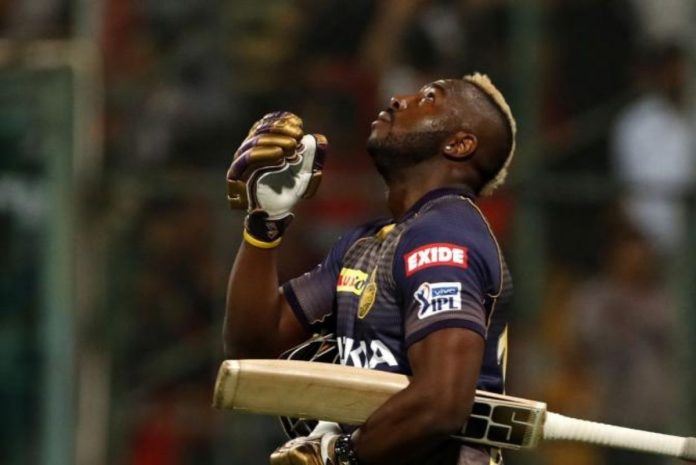 Andre Russell is a Jamaican cricketer who currently represents the West Indian Test cricket team. Born on 29 April 1988 in Kingston, Jamaica, Russell is best known for his hard-hitting in the T20 format.

The Barbadian made his Test debut for the West Indies on 15 November 2010 vs Sri Lanka. This was incidentally his only Test appearance. Since then, Andre Russell has scaled to new heights representing the West Indies in the ODI format and the T20I format.

Owing to his prowess, Andre Russell has been a fixture in franchise cricket. He is quite popular in the IPL and has been a part of the Kolkata Knight Riders since 2014.

In this article, we will have a look at Andre Russell’s Salary, Net Worth, Personal Information, Career Details, Wife, Controversies, FAQs, etc

Andre Russell Net Worth: Andre Russell’s net worth is reported to be around $13 million or approximately 95 Crores in Indian Rupees. He has earned his net worth through endorsements, his match fee, his salary during his playing career, his investments, etc.

Andre Russell’s Salary: The following has been the Jamaican’s salary in the Indian Premier League over the years:

Andre Russell’s Endorsements: Andre Russell has endorsed the following brands at one point in his cricketing career:

Andre Russell’s House: Andre Russell reportedly lives in a “posh house” in Kingston, Jamaica. The house is priced between 2-5 crores INR. But the exact details of the house are unavailable at the moment.

We will update more details in this section when we come across information from ruptured sources!

West Indies: The allrounder made his national debut on 15th November 2010 in a test match against Sri Lanka. His ODI and T20I debuts came the following year against Ireland and Bangladesh respectively. Interestingly his ODI debut came in the 2011 ICC Cricket World Cup in India.

Andre Russell’s best moment in the West Indian jersey came in 2016 when he helped his team become the ICC T20 World Champions. This was the side’s second T20I World Cup title.

The player suffered a setback in 2017 after he was banned for a year. However, Russell came back and grew even stronger as he was an integral part of the West Indies team in the ICC World Cup 2019 and the ICC T20 World Cup 2021.

IPL Career: Andre Russell started with the Delhi Daredevils, playing for the side in 2012 and 2013. Following this, he moved to the Kolkata Knight Riders. In his first season, Russell helped KKR lift the IPL title. His power-hitting soon made Andre Russell a crowd favourite and he has since become one of the marquee players of the league. Andre has 1981 runs in 96 IPL games as of 12th May 2022.

Other Leagues: Andre Russell has also played for the Jamaica Tallawahs, Sydney Thunder, Islamabad United, and Dhaka Dynamites, winning titles with all these franchises.

Apart from this, Andre Russell has won multiple player of the match awards throughout his career.

Jassym Lora: Andre Russell has been married to Jassym Lora since 2016. She is a fashion model and an Instagram influencer who has posed for many top brands across the globe. It is not known how or when the Jamaican cricketer met the Miami-based model.

The couple has a beautiful daughter named Aaliyah Russell. The duo is very much in love and we hope that their bond lasts forever.

Doping Ban: Andre Russell was banned for a year in 2017. This came into effect after the West Indian allrounder missed three consecutive doping tests in 2016. These tests were to be conducted by the Jamaica Anti-Doping Commission (JADCO). Following the ban, Russell arguably became an even more reliable player so this was a positive coming out of a tough 12-month period in his career.

“Rift” with Dinesh Karthik: Andre Russell was not happy with the Kolkata Knight Riders’ performance in the 2020 IPL. Hence the West Indian openly stated it in an interview. This gave a hint that there was a rift between Russell and the KKR captain Dinesh Karthik and soon this made the headlines.

However, Dinesh Karthik was quick to end these rumors. The KKR captain claimed that he had a great relationship with Andre Russell. Hence the two reportedly had a chat “man to man” and made sure that everything became clear within themselves and the team.

Andre Russell is active on social media as well

Andre Russell generally posts about cricket, his pastime activities, and his friends and family.

Q- What is the name of Andre Russell’s kid?

Yes, he is actively playing for the West Indies and his other franchise teams including the Kolkata Knight Riders.

Q- Against whom did Andre Russell make his West Indies debut?

It is reported that he currently lives in Kingston, Jamaica.

Q- Who is Andre Russell married to?

Andre Russell is married to Jassym Lora since 2016