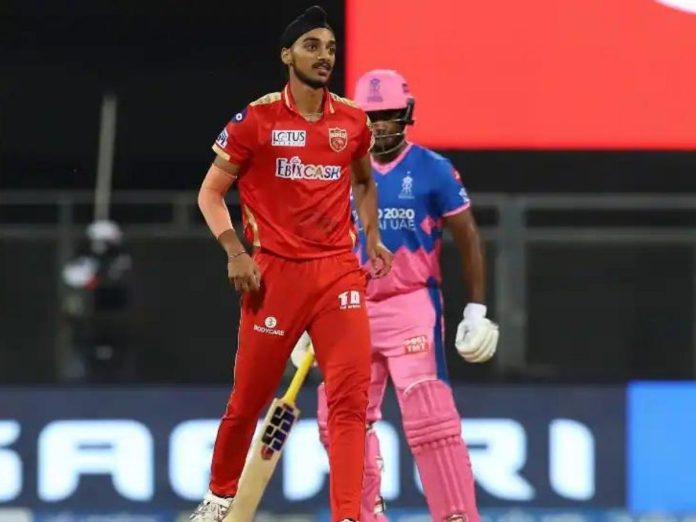 Arshdeep Singh is an Indian cricketer who plays for Punjab in the domestic circuit. Born on 5 February 1999, the pacer is regarded as one of the best young talents in the country.

Owing to his prowess, the Punjab-based bowler was selected for India’s U-19 team for the ICC U19 World Cup 2018. Arshdeep and his team ended up winning the tournament.

Arshdeep Singh has also been a part of the Indian Premier League. The spinner has played for the Kings XI Punjab since 2019. The Punjab Kings (Formerly KXIP)  paid 4 crores to retain the bowler’s services before the 2022 IPL auction!

In this article, we will have a look at Arshdeep Singh’s Salary, Net Worth, Personal Information, Career details, Wife, Controversies, FAQs, etc

Arshdeep Singh Net Worth: Arshdeep Singh’s net worth is reported to be around $650,000 or approximately 5 crores in Indian Rupees. The Chandigarh-based bowler has earned his net worth through endorsements, his salary during his playing career, his investments, etc.

Arshdeep Singh’s Car Collection: The Punjab Kings bowler owns a White Toyota Fortuner. The price of this car is around INR 32 lakhs in the Indian market currently.

Arshdeep Singh’s House: Arshdeep Singh reportedly owns a home in Chandigarh. The bowler reportedly lives in a three-floor home that is well furnished. The house has a modern look to it when seen from the outside.

The exact locality and other details about his home are not available at the moment.

India U19 and Domestic Debut:

Arshdeep Singh had a golden start to his cricketing career as his efforts paid off in 2018. The bowler was picked up in India’s U19 squad for the 2018 ICC U19 World Cup. The Prithvi Shaw-led side managed to win the trophy, hence giving a bright start to the bowler’s career. Owing to this, Arshdeep was selected in the Punjab state team for the Vijay Hazare Trophy in the 2018/19 season. He has since played in the Syed Mushtaq Ali Trophy and the Ranji Trophy as well.

Indian Premier League: After a positive debut in domestic cricket, Arshdeep Singh was picked up by the Kings XI Punjab in the 2019 IPL auctions. The bowler finished his first IPL season by picking up 3 wickets in 3 games. Arshdeep followed this up by picking 9 wickets in 8 IPL games in 2020.

The bowler’s biggest breakthrough came in 2021 when he picked up 18 wickets in 12 games, hence being the top wicket-taker for his team. This included an impressive 5/32 as the Royals.

Arshdeep Singh was retained by Kings XI Punjab before IPL 2022. Hence it has to be seen as how the Chandigarh-based player performs this season.

We believe that Arshdeep Singh will add more individual accomplishments to this list in the coming years.

It is not known if the 23-year-old is dating anyone. Even if he is in a relationship, Arshdeep Singh has kept his love life away from the media. Owing to this, we don’t have any information about his love life.

We will update this section once we find information about his girlfriend or his wife from a reputable source.

There are no controversies surrounding the 23-year-old Medium-Fast bowler at the moment. Arshdeep Singh has been highly professional throughout his cricketing career for his domestic team and his IPL team. The Indian bowler has not been part of any spat or controversy both on and off the field.

We hope that Arshdeep continues to be the gentleman that he is and stays out of controversies as he goes forth in his cricketing career and his life.

The Punjab Kings bowler is active on social media as well

Arshdeep Singh generally posts about cricket, his cars, his pastime activities, and his friends and family.

No, Arshdeep Singh is yet to play for the Indian senior team.

Yes, he is actively playing professional cricket for the Punjab Kings and his domestic team Punjab.

Q- Against whom did Arshdeep Singh make his India debut?

Arshdeep Singh is yet to make his debut for the Indian National Team. The bowler has played for the India U19 side.

Q- Who is Arshdeep Singh’s Girlfriend?

It is not known if Arshdeep Singh is dating anyone at the moment.

Arshdeep Singh plays for the Punjab Kings in the Indian Premier League. The Kings retained him for 4 crores before the 2022 IPL Auction.