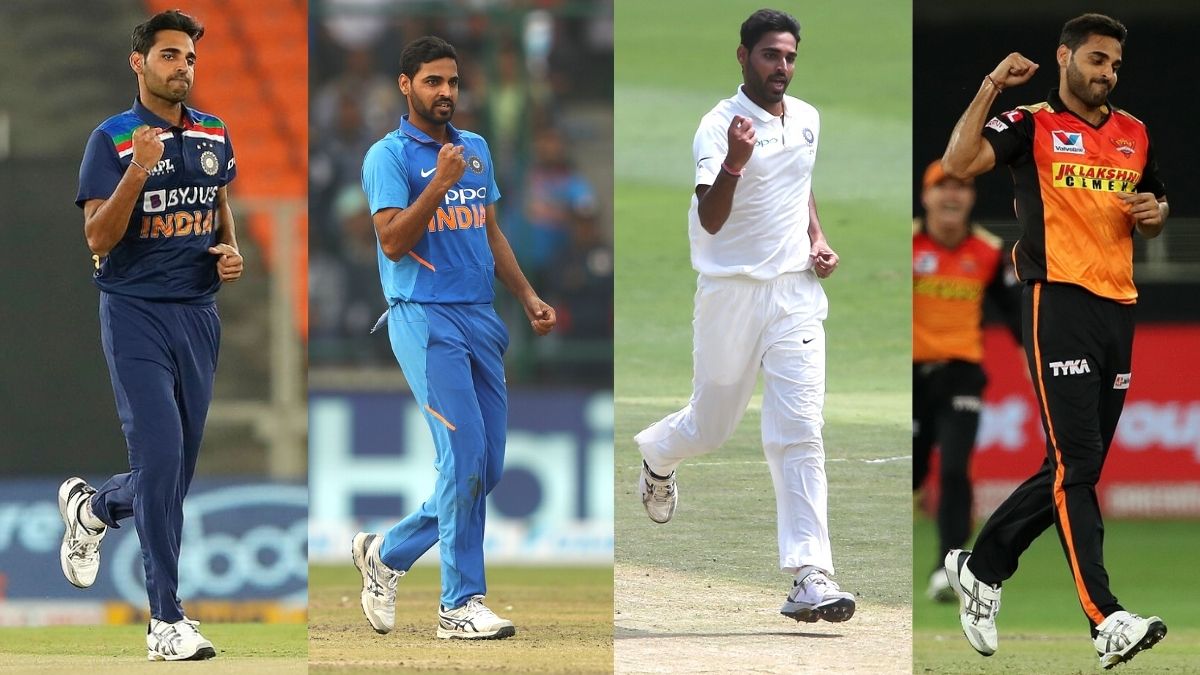 Bhuvneshwar Kumar is an Indian international cricketer and a right-arm fast bowler. He is India’s finest bowler, having become the first Indian bowler in all formats of the game to collect a five-wicket haul. In December 2012, he made his international debut, taking three wickets in a T20I match against Pakistan. Kumar plays for Sunrisers Hyderabad in IPL and plays for UP in state cricket.

He is known for his lethal swing bowling which has given him the nickname ‘Bhuvi’. He has been quite injury-prone recently but has returned to cricket with a bang in 2021. Apart from bowling, he has many times helped India with his batting, whether in the famous Pallekele ODI where he outshined MS Dhoni and scored match-winning 53* runs or partnership of 99 runs at Capetown with Hardik Pandya for 8th wicket. Bhuvneshwar Kumar has always come to the rescue for Indian Team.

Bhuvi is one of India’s finest and highest-paid cricketers. His life is not in any way inferior to that of a celebrity. With his wife, Nupur Nagar, he leads an extraordinary and wealthy lifestyle. In this post, we’ll look at his personal life and financial worth.

Bhuvneshwar Kumar’s Net Worth in 2021 is 65 crore rupees. His main source of income is cricket. He is one of the most admired cricketers of this generation and reportedly earns more than 9 crores per year, which includes more than 1 crores through brand endorsements.

Bhuvneshwar Kumar Net Worth over the years

Let’s now go into details of Bhuvneshwar Kumar’s net worth.

Bhuvneshwar Kumar is a Grade B contracted player for the Indian team, his primary income is through match fees and endorsements.

Bhuvneshwar Kumar was picked up by Royal Challengers Bangalore in the 2009 auction for 6 Lakhs but warmed the bench for 2 seasons. In 2011, he got snapped up by the Pune franchise for a whopping 2 crores and finally got a chance to showcase his talent. He is now one of the biggest earners from IPL, he earns 8.5 crores per season for Sunrisers Hyderabad. He has earned more than 50 crores through IPL.

Bhuvneshwar Kumar is currently Grade B centrally contracted player but in 2018, he was in the A+ group. He is an injury-prone player and these injuries have led to his demotion to B grade as he currently only plays white-ball cricket for India. In Grade B, he earns 3 crores per year.

Bhuvneshwar Kumar is one most respected cricketers of this generation and his positive persona is appreciated by everyone. He reportedly earns more than 1 crores per year through Brand Endorsements. Some brands top brands, which are associated with Bhuvneshwar Kumar are :

Bhuvneshwar Kumar is a very resolute personality, he is not a social media geek like other cricketers but can be seen sharing some crazy throwbacks and moments with his loved ones. He is often seen posting pictures about his lovely doggy Alex Nagar.

Bhuvneshwar Kumar is not a huge car or bike lover, he merely posts any pictures of his cars but he has some luxurious vehicles in his armory. His collection is small but it’s quite prestigious.

Bhuvneshwar Kumar lives in Meerut. He plays for UP in state cricket. His father was a sub-inspector and they used to live in a Government allotted house but after grabbing a big IPL contract, they shifted to their own house. After his marriage to Nupur Nagar, he built a luxurious designer house in Meerut worth more than 2 crores.

Bhuvi is a character who enjoys having a good time and he is a shy person by nature. He is not extremely active on social media, despite having a massive following. Let’s have a look at his personal info.

Bhuvneshwar Kumar is a very shy personality and is married but before his marriage, he was once linked with beautiful South Indian actress Anusmriti Sarkar during his early days with Sunrisers Hyderabad.

He got engaged to Nupur Nagar in Greater Noida on 4 October 2017. Nupur is a professional engineer. She was Bhuvneshwar’s childhood friend. Both of their families used to reside in the same area in Meerut’s Ganga Nagar.

He was first picked by RCB in the 2009 auction but never played in IPL, although got an opportunity to play for them in a Champions League game.

No, they are not brothers but they do share a special bond since they play for the same state and Bhuvneshwar considers Praveen Kumar as his mentor.

Yes, he is married to Nupur Nagar.

Yes, Bhuvneshwar once revealed that she was his childhood crush when they were 11 years old.

Q. Is Bhuvneshwar’s wife a designer?

No, Nupur Nagar is an Engineer and works for a Multinational Corporation in Greater Noida.