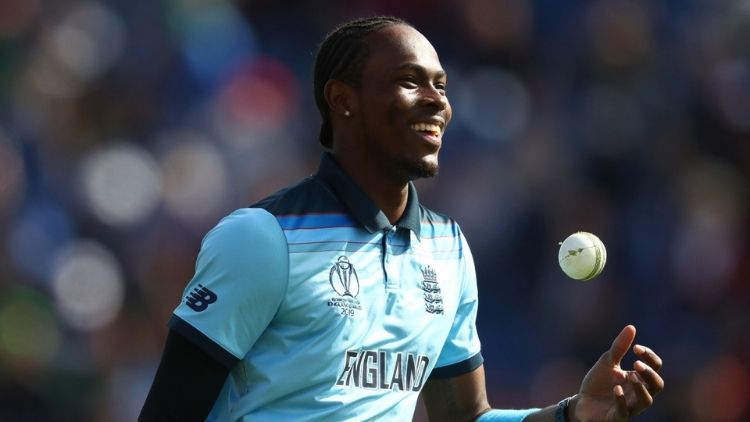 Who is Jofra Archer?

Jofra Archer is a talented Cricketer from England, who is a Barbadian and plays for the England Cricket Team Internationally. He also features in the English Domestic Cricket for Sussex County. His full name is JofraChioke Archer, who was born on 1 April 1995. In April 2019, Archer was called to be a part of the limited over Team Vs Pakistan and Ireland. His international debut for England came in May 2019. Jofra was also a proud member of the Team that won England’s maiden World Cup in 2019. He also made his Test appearance in 2019 Ashes against the arch-rivals Australia. Archer was picked as one of the Wisden Cricketers of the Year in April 2020. Over the years, he has emerged as one of the lethal pacers in the World of Cricket.

Jofra Archer was born on 1 April in 1995 to Frank Archer and Joelle Waithe. His father belongs to England, while his mother is from Barbados. He follows a mixed ethnicity and Christianity. He acquired England’s citizenship via his father. His schooling was completed at Hilda Skeene Primary School, Christchurch Foundation. Archer also went on to attend Dulwich College. Jofra archer nationality is Barbadian.

Jofra had to face many hurdles in his initial phase of the Cricket career as he could not play for England despite born to a father in England and having a British Passport. He had to undergo a 7 years residency period. But England and Wales Cricket Board (ECB), luckily in November 2018, changed a rule by making the residency eligibility from 7 to 3 years in line with the ICC norms.

As things stand today, Jofra Archer is single and seems to be fully dedicated to making his career in Cricket even more lucrative. He is not related to any female as of now. Even his social media handles fail to give any insights about his status about love and relationship.

Jofra Archer performed brilliantly in various Domestic Tournaments, and the ECB relaxed its eligibility norms to help Archer make it to the English Team in the ICC Cricket World Cup 2019. The change worked in favor of the hosts as he played the role of an X-Factor in the Tournament.

When Jofra began his journey as a Cricketer, he featured in the West Indies Under-19 Team. After crossing the age of 19, he came to England to participate in the County Championship and to make his presence felt. Sussex Cricket Team picked him up in 2016, and he made his First Class debut. Archer also went on to make his List A career debut after a few weeks and played in the Royal London One-Day Cup. He has had a nice Tournament and was signed to play in the Bangladesh Premier League (BPL) for Khulna Titans in 2017.

While featuring in the Bangladesh Premier League for Khulna Titans, he had a good season and ended up picking 10 wickets and scoring 87 runs in 9 innings. He had a great batting strike rate of 164.5. Owing to his sound performance in the Domestic Cricket and the BPL, he was picked by Hobart Hurricanes to play in the Big Bash League (BBL). Archer played in all the12 games of BBL and turned out to be his Team’s highest wicket-taker. He picked up 16 wickets at a strike of lesser than 3 overs/wicket. He was also the only bowler for them to bowl a maiden over in the Tourney. Playing in T20 leagues opened gates for Archer to feature for Quetta Gladiators in the Pakistan Super League’s 2018 edition. Even though he got to play only 2 games, he took 5 wickets at the economy of 6.62. By this time, Jofra Archer had already attracted the biggest T20 league in the World, the IPL. Jofra Archer IPL career started in 2018. He played his first match in the IPL for Rajasthan Royals (RR) in 2018 and was signed for $8,00,000. Archer ended up being RR’s highest wicket-taker with 15 scalps in 10 innings at 15.53 strike rate. While featuring for his BBL Team, he ended by taking 18 wickets in 15 matches in 2018/19 seasons. Jofra could not continue with the same form when compared to the last season and showed a minor dip. He took 11 wickets in 11 games in 2019 IPL as RR finished at the 7th position in the Point Table.

ECB had a rule that said that a player who was moving to England after 18 years would need to live in the country for 7 years before representing the National Team. Hence, the rule meant that Jofra Archer was not eligible until 2022. But owing to his spellbound performances in the English Domestic Cricket, ECB was forced to alter the law. They relaxed the number of years from 7 to 3 to name Jofra Archer in the 2019 ICC Cricket World Cup Team. This way, Jofra was able to make his International debut for England Vs Ireland in May 2019. He returned with a figure of 1/40 and started his One-Day career on a decent note. England won the game by 4 wickets after chasing a modest 199. After a few days later, Archer also played his first T20 game Vs Pakistan at Cardiff. Pakistan had scored 173, and Jofra took 2/29 in 4 overs. England was able to chase the total with 7 balls to go and won the game by 7 wickets.

In the 2019 ICC Cricket World Cup, Jofra Archer was 3rd highest wicket taker in the marquee Tournament and highest for England. Playing in just 11 games, he took 20 wickets. He also had the honor of bowling the vital Super Over of the most exciting World Cup Final Vs New Zealand. ECB’s decision to change residency rules’ eligibility worked for the Team as England was finally able to win its 1st World Cup Trophy in 2019. The ICC named Jofra Archer as the Rising Star of the squad.

After 3 weeks playing in the World Cup Final, Jofra Archer debuted for England in the 2nd Ashes Test Vs Australia at the Lord’s. It was a low scoring match with England scoring 258 twice, and Australia chased 267 with 4 wickets remaining in the 2nd innings. Archer played a knock of 12 runs in the 2nd innings and picked 2/59 and 3/32 in 1st and 2nd innings. Archer went on to play in the next 3 Test matches and took a total of 22 wickets in 4 games, also featuring a couple of instances of fifer (5 wickets haul). Jofra, after the end of the Series, earned his first ever Central Contract of the ECB.

Jofra Archer Net Worth and Salary

Jofra has a successful career in Cricket so far and even been the brand ambassador for Adidas. As of now, he has an estimated worth of $3 million. Jofra Archer’s central contract from England and Wales Cricket Board (ECB) now earns him over £1 million a year, as he plays all three major formats for England. In 2020 Archer was retained by Rajasthan Royals for 7.2 Crores. Jofra Archer current teams are Rajasthan Royals, England cricket team, Sussex County Cricket Club, Hobart Hurricanes, Quetta Gladiators & Khulna Tigers

Jofra Archer has made around ₹ 216,000,000 from IPL. Here is a detailed breakdown of his IPL earnings!

Now we take a look at Archer’s Cricket Stats consisting of his major cricket stats & cricket Milestones achieved by him in his career. Here we have all the Jofra Archer Stats including his career statics, batting career summary & all his basic cricket information. Jofra Archer’s jersey number in all formats is 22.