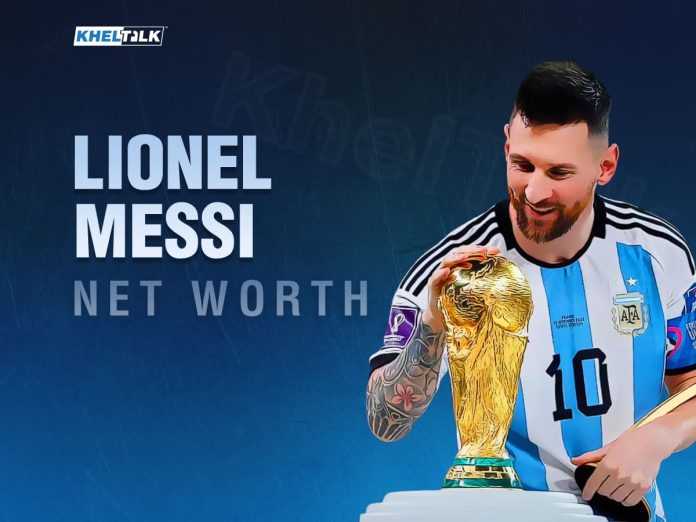 Lionel Messi is one of the richest footballers across the globe. Messi’s Net Worth is $450-500 million. Lionel Messi is an Argentine professional footballer who plays as a forward for Ligue 1 club Paris Saint-Germain. He is also the captain of his National team. Born on 24 June 1987, the 35-year-old has a lot of Club and International records to his name.

Considered one of the best football players of all time, Messi has a record-six Ballon d’Or to his name. The Argentine has scored 700+ goals in his professional career and played the majority of his career at Football Club Barcelona.

In this article, we will be looking at various details of the Argentine, including his net worth.

Net Worth: Lionel Messi’s net worth in 2022 is said to be around the $450-500 million (USD) mark. According to Forbes, Lionel Messi is the second-highest-paid athlete in the world. His net worth is the sum of his salary and various endorsements that the Argentine does.

Salary: The Argentine reportedly earns more than €800,000 per week at PSG. Messi is currently the highest-paid (salary) footballer in the world according to Forbes in 2021. Messi’s annual salary is approximately €30 million (without bonuses) approximately. The Argentine can add up to €10 million to his original sum through bonuses every season.

According to a leaked document, it was reported that Messi’s salary at Barcelona during his final years was a whopping €138 million per season.

Messi is one of the richest people in the world. Hence it is natural for him to own some of the costliest things. Here are a few assets that Lionel Messi owns:

Teams represented by Lionel Messi in his professional Career

The following are the teams that Lionel Messi has represented:

Lionel Messi has also played for the youth teams of Barcelona and Argentina.

Early life & Youth Career: Messi who was a supporter of Newell’s Old Boys, joined the Rosario club when he was six years old. That’s where Messi’s footballing journey began and he was there until 2000. As the Messi family had relatives in Catalonia, they sought to arrange a trial with Barcelona in September of the same year.

After a year at Barcelona’s youth academy, La Masia, Lionel Messi was enrolled in the Royal Spanish Football Federation (RFEF) in February 2002. Messi slowly made his way through the Barça C team and then the B team.

FC Barcelona: At 16 years, four months, and 23 days old, Messi made his first-team debut when he came on in the 75th minute during a friendly against Porto on the 16th of  November, 2003.

Messi debuted in La Liga on the 16th of October 2004 and slowly established himself as the biggest player in the club’s history.

He was at the helm as Barcelona’s golden period began under Pep Guardiola. Various players came and went but Messi was a constant at Barca until 2021. La Pulga scored 650+ with FC Barcelona which is the highest a player has scored at a single club.

Messi has had a slow start for PSG, but he has already managed to score three Champions League goals for the Parisians at the time of writing this article.

Argentina: Argentina’s manager at that time, José Pékerman gave Messi his first call-up for a friendly against Hungary on 17 August. Aged 18, Messi made his senior debut for Argentina in the Ferenc Puskás Stadium when he came on in the 63rd minute, only to be sent off after two minutes for a perceived foul against Vilmos Vanczák.

Lionel Messi had his best time in the Argentina kit when he led his country to the 2014 World Cup finals. In the finals, Argentina narrowly lost 1-0 against Germany.

After losing the 2016 Copa America final, Messi announced that he was retiring from the national team. But there was an outcry among the fans and in the end, Messi reversed his decision.

Messi finally lifted the Copa America title with Argentina in 2021, which was his first International title.

Throughout his awe-inspiring stint at Barcelona, Messi had an incredible feat of netting 672 goals in 778 games, which resulted in him shattering many records in the process while at Camp Nou. The following are Lionel Messi’s Stats for his club and his country in all competitions as of December 2022.

We know Lionel Messi is one of the best players to ever play the game. Let’s have a look at his trophy hall for his club and country, his brilliance:

Accolades won by Lionel Messi with his team:

The following are some Personal details about La Pulga:

Antonela Roccuzzo: Messi has been in a relationship with Antonela since 2008. The couple grew up in the same neighborhood of Rosario in Argentina and have known each other since they were 5 years old.

Antonela is reportedly an Argentinian model and dietician but is best known for being the wife of Lionel Messi. She has taken to the role of homemaker since marrying the 6-time Ballon d’Or winner.

The couple got married on the 30th of June, 2017 in a wedding that took place in Messi’s hometown in Argentina.

Q. How many goals has Lionel Messi scored in the World Cup?

Messi has netted a total of 13 goals in his 26 appearances in the World Cup.

Q. How many Ballon d’Or Messi has won?

Messi has received the award seven times, most by any player in the history of Football.

Q. Why is Messi wearing the number 30 jersey at PSG?

Because Neymar is PSG’s #10. Neymar reportedly offered the jersey number but Messi refused it.

Q. Who is Messi’s agent?

His father Jorge Messi serves as his agent as well

Messi scored 91 goals in 2012 which is still a Guinness World Record.

Q. Why did Messi leave Barça?

Barcelona was in a financial crisis and could not afford Messi even though the player was ready to get a pay cut.

Q. How many children does Messi have?

Q. Which team does Messi support?

Messi is a fan of Newell’s Old Boys