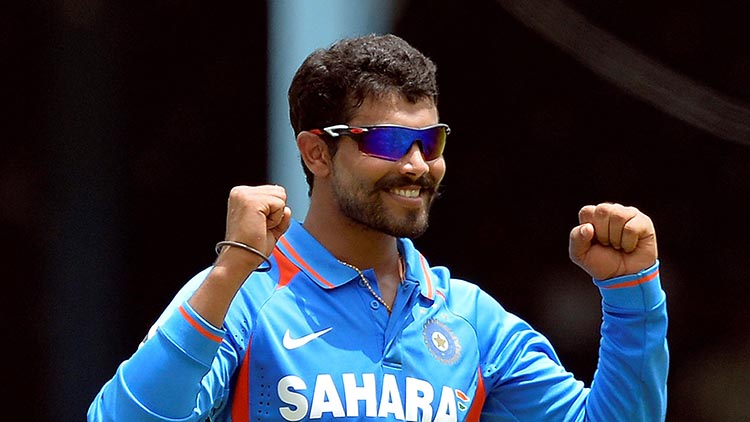 Who is Ravindra Jadeja ?

Ravindra Jadeja is a Cricketer of India, who was born on 6 December 1988. His full name is Ravindrasinh Anirudhsinh Jadeja. He is one of the most successful all-rounders that the Indian Cricket has seen.

His role in the Indian Cricket Team is of a left-hander middle-order bat and a left-arm orthodox bowler. His First-Class Team is Saurashtra, and he plays in the IPL for the Chennai Super Kings (CSK).

Ravindra Jadeja was a part of the Under-19 Indian Cricket Team that went on to win the coveted title in Malaysia in 2008 under the leadership of Virat Kohli, the current Skipper. His ODI debut was against Sri Lanka on 8 February 2009. He had a nice match as he played an inning of 60 off 77 balls. But he had to wait for at least 4 years before making his Test debut in Nagpur Vs England on 13 December 2012.

During the IPL Auction 2012, Jadeja was picked by Chennai Super Kings for $2 million. He went to Gujarat Lions (now defunct) for Rs.9.5 crore in the 2016 IPL Auction. It was done after CSK was banned by BCCI to feature in the IPL for 2 years.

Ravindra Jadeja is also the first Indian left-arm spinner to take 150 ODI wickets on 22 January 2017. He achieved the feat by dismissing Sam Billings at the iconic Eden Gardens in Kolkata.

He also achieved the feat of emerging as the top-ranked bowler in March 2017, globally leaving behind Ravichandran Ashwin who had that position for a long time.

He is also an excellent fielder, among the best in the world, along with that he is an explosive bowler

Here is some basic information about Ravindra Jadeja age, height, date of birth & all the basic stuff.

Jadeja’s beard always has a buzz around it. He always tries new styles on his beard. He can be seen sporting a new look from time to time. He likes to experiment with the looks and styles of his beard.

Jadeja has total 4 tattoos on his body. –

2 – A Dragon Tattoo on his biceps.

3 – A funky abstract design tattoo on his back.

4 – A horse “stallion” tattoo on this forearm

Ravindrasinh Anirudhsinh Jadeja was born on 6 December 1988. The father of Jadeja was Anirudh, a Watchman who worked for a Private Security Agency. His father always wanted him to become an Army Officer, but he had a passion for Cricket. Like most of the Indian child, even he was scared of this father during his childhood days. He lost his mother, Lata, to an accident in 2005 and its trauma almost made his quit Cricket. He also has a sister, Naina, a Nurse, who lives in Jamnagar, Gujarat.

Ravindra Jadeja got married to Reeva Solanki (aka Rivaba Solanki) on 17 April 2016. They had a grand Rajput Style Wedding in Rajkot. It was an arranged marriage. Jadeja’s Wife Rivaba is a mechanical engineer by profession & she is from Junagadh.

On June 8, 2017, Ravindra Jadeja was blessed with a baby daughter. They named their daughter Nidhyana.

India had always missed the services of true all-rounder that can contribute with both ball and bat significantly even since Kapil Dev’s era ended. However, Indian Cricket had been fortunate enough to get the services of all-rounders who can bowl, bowl and field. These players have been able to add that X-Factor or what is known as the 3-dimension to the game. And one such talented and skillful all-rounder has been none other than Ravindra Jadeja. He has emerged as the ‘go-to’ bowler for the Captain while needing a break. Along with being a consistent performer in the lower order, he has also been India’s one of the best fielders. His fielding abilities have been proven many times in the past, and he is now ranked among the best fielders of the world. Ever since making his mark in International Cricket, Ravindra has earned a lot of acclaim during the last 8 years. Rightly so, he has been rewarded with many things in his professional life. Let’s have a look at the net worth of the Ravindra Jadeja:

The Net Worth of Ravindra Jadeja

Ravindra Jadeja Salary by the BCCI

In the Retainership Contract by the BCCI in 2018-19, Ravindra Jadeja was counted under the list of Grade A Players. Hence, he was paid a Salary of Rs.5 crores for being in that group. Going by how he has performed in the last season, there are chances of him being considered for Grade A+ Category that comes with a Salary of Rs.7 crores.

Ravindra Jadeja has been playing for the Star IPL franchise, the Chennai Super Kings for the last 6 seasons between 2012-2019.

He has been among the highest-paid Cricketers in the IPL Auction 2012 when CSK got him for astronomical Rs.9.2 crores, and this increased his net worth. Take a look at the Salary of IPL throughout the IPL seasons:

Forbes India placed Ravindra Jadeja on the 68th position in the Highest-Paid Celebrities list in 2018 owing to his annual income of around Rs.15.39 crores.

Ravindra Jadeja has always not been a force in the advertisement industry if you compare him with figures like Mahendra Singh Dhoni and Virat Kohli. But he got the chance to be made the Brand Ambassador for Bajaj Almond Oil in the year of 2019. He was also the Brand Ambassador of Zeven, a Mahesh Bhupati brand in 2016. He had also advertised for brands such as Gujarat Tourism, Reliance Jio, Life OK, Incredible India, Castrol, and Asian Paints.

Ravindra Jadeja’s investments at a glance –

The Instagram handle of Ravindra Jadeja (fondly called as Jaddu in the Indian Cricket Team) is @royalnavghan, and it is apt for a lifestyle that he lives – like a true Rajput! After getting an amazing deal in the 2012 IPL Season, he got land in Ahmedabad to construct his dream home. The net worth of his property today stands at around Rs.8 crores.

Sir Ravindra Jadeja is a big fan of Horse Riding. He has many horses of multiple breeds in his Farmhouse in Jamnagar. He is also an owner of Hayabusa, one of the elite sports bikes globally. But he does not have fancy sports cars. He has a Black Hyundai Accent, Audi A4 & an Audi Q7.

Ravindra Jadeja has always proved his worth on many occasions while playing for the National and IPL sides. He played one of the best knocks Vs New Zealand in the Semi-Final of the World Cup 2019. He went on to score a fighting 77 off 59 balls. He also took 1 wicket and took a catch and had a direct hit to his name.

Jadeja is the only Indian Cricketer having scored 3 Triple centuries in First-Class Cricket. He achieved this remarkable feat at a young age of only 23 in 2012. It was that performance that helped him earn his Test debut Vs England in the home Series the same year. Ever since then, he has been playing in almost all formats of the game for India. In 41 matches at 32.28 strike rate, he has 1,420 runs. With the ball, he has 192 scalps at an impressive average of 23.68.

Some interesting facts about Ravindra Jadeja –