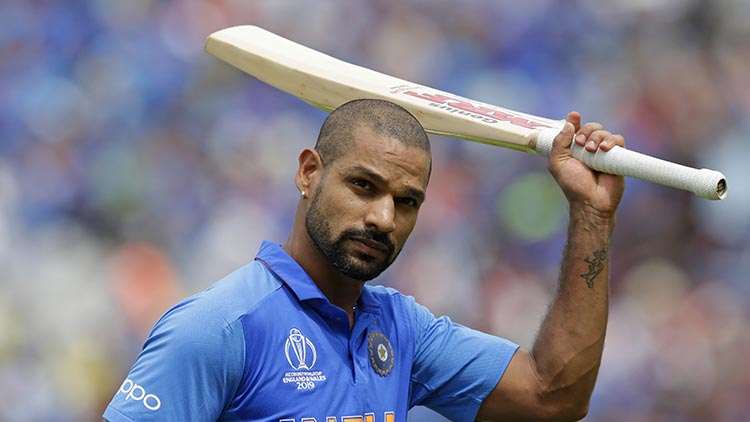 Who is Shikhar Dhawan?

Shikhar Dhawan is Cricketer from Delhi, India and was born on December 5, 1985. He is a left-hander and opening batsman. He is also a part-time off-spin bowler. In Domestic Cricket, he features for Delhi and in the Indian Premier League (IPL), plays for the Delhi Capitals.

Before making his First-Class debut in November 2004 for Delhi, Shikhar Dhawan featured for the India U-17 and U-19 Teams respectively. He was the leading run-scorer for India in the 2015 ICC Cricket World Cup that was held in Australia/New Zealand. In 2016, he also emerged as the fastest Indian to reach the milestone of 3000 ODI runs. He is also the 2nd fastest Indian batsman to reach 4000 runs in ODI in December 2017.

In Twenty20 Internationals, Shikhar Dhawan also has a record of recording most runs in a calendar year. He seems to love scoring in ICC Tournaments and is one of India’s most consistent performers in ICC events.

Shikhar Dhawan made his ODI debut in October 2010 against Australia in Vishakhapatnam. He debuted in Test Cricket against the same opponent at Mohali in March 2013. He scored the fastest Test century by any batsman on debut as he played an innings of 187 runs off 174 balls.

Dhawan is a top contributor in ICC Tournaments and was the highest scorer in the 2004 U-19 World Cup and Champions Trophy in 2013 and 2017. He has the record for being the fastest to reach 100 runs in ODI ICC Tournaments.

In August 2013 at Pretoria, he scored the then 2nd highest individual score in a List A game. He went on to score 248 runs from just 150 balls while playing against South Africa A for India A.

During the 4th ODI that was played at Johannesburg Vs South Africa, he emerged as the first Indian and 9th overall to hit a ton in his 100th ODI appearance. He also became the 6th batsman and first Indian to score a ton before lunch on Day 1 of a Test match Vs Afghanistan on 14 June 2018.

Shikhar Dhawan was born in Delhi on 5 December 1985 in a Punjabi family. Shikhar Dhawan family includes his father, mother & his younger sister. His mother’s name is Sunaina, his sister’s name is Shreshta and his father is Mahendra Pal Dhawan. He did his initial schooling from Meerabagh, Delhi-based St. Mark’s Senior Secondary Public School. He trained under the guidance of Tarak Sinha, his Coach at Sonnet Club ever since the age of 12. Tarak Sinha has had the distinction of training 12 International Cricketers. When he started playing Cricket, Shikhar Dhawan was a wicketkeeper.

They say love knows no boundaries and one can find his soul mate anywhere. This is true for Shikhar Dhawan, as he found his true love on the internet, Facebook to be exact. Shikhar Dhawan wife name is Ayesha Mukherjee. Shikhar Dhawan and his now-wife Ayesha Mukherjee meet each other via Facebook via a mutual friend who is none other than Cricketer Harbhajan Singh himself. Their love story started on Facebook, and they got engaged in 2009, and finally got married in 2012.

Shikhar Dhawan had a hard time convincing his parents for the marriage as Ayesha was almost ten years older than Shikhar, and she had two daughters from her previous broken marriage. Shikhar Dhawan wife age is around 45 years old as she was born on 27 August 1975.

But as they say true love triumphs all, they finally got married on 30th October 2012 in a traditional Sikh wedding. And their wedding was attended by many cricketers including Virat Kohli.

Shikhar Dhawan has a massive following on social media. He has over 10 Million followers on Instagram and Twitter combined.

On 29 December 2017, when he and his family were travelling to Cape Town to play Vs South Africa, they were stopped from boarding the flight. His wife and kids were not allowed to board the plane because he did not have his kids’ birth certificates.

Shikhar Dhawan Net Worth is estimated to be around $15 million.

Shikhar Dhawan is a known name in the advertising world, and rightly so, he makes around Rs.5.2 crores from Ad deals with different brands. He has been advertising for brands like Boat, Canara Bank, Ramsons, GS Caltex and Big Bazaar FBB. He also advertises for brands like DaOne, his home décor brand and Alcis sports. He has also been featuring in the Ad copies of brands like Oppo, Lays and Nerolac being a part of the Sunrisers Hyderabad (SRH) earlier in the IPL. He ranks 3 in the bat endorsement deals. Shikhar Dhawan is among the elite Cricketers like Tendulkar, Kohli, Lara, and AB de Villiers playing with the MRF Sticker on his bat. You may be amazed to know that he is paid a whopping Rs.3 crore yearly for sporting the label on his bat.

For the 2018-19 seasons, Shikhar Dhawan was downgraded to A Category from A+ Category in the BCCI Contract List. It led to a decrease in this yearly Salary to Rs.5 crore from Rs.7 crore. It was owing to his absence from the Test Team from the England Series. But he has made a lot of earnings while being in the A+ Category. You may be amazed to know that he was paid more than the Indian Skipper in the 2015-16 seasons. Yes, he made Rs.87.76 lakhs as part of his winnings and Salary. As things stand today, he makes Rs.5 lakh to play in a Test match, Rs.3 lakh for playing in an ODI and Rs.2 lakh in a T20 by the BCCI. Other than the annual BCCI contract, he even makes a total of about Rs.5.2 crores for playing for Delhi Capitals in the IPL. He was transferred to DC after playing for SRH in the IPL earlier.

Shikar Dhawan has earned almost ₹ 701,000,000 from IPL till now. Here is a detailed breakdown of his IPL earning –

Shikhar Dhawan was born and brought up in Delhi. He married Ayesha Mukherji in October 2012 and has 3 kids from the wedlock. The family lives in their lavish Bungalow in West Delhi, and the worth of the house is speculated to be around Rs.13 crores. The Delhi Cricketer is extremely fond of cars, and it is evident from his collection. It includes Mercedes Benz, Jaguar, Rolls Royce and BMW and also Hayabusa (Suzuki) bike.

He has also ventured into the entrepreneurship mode with his teammates and launched home décor brand – DaOne in October 2018 with his wife, Ayesha. As of now, the company is still in its initial stages, and its exact valuation is not possible.

Now we take a look at Shikhar’s Cricket Career, his major cricket stats & cricket Milestones achieved by him.